There are so many different types of lamps out there that having an understanding of the “lamp families” helps you understand how to troubleshoot them easier. Let’s dive in. 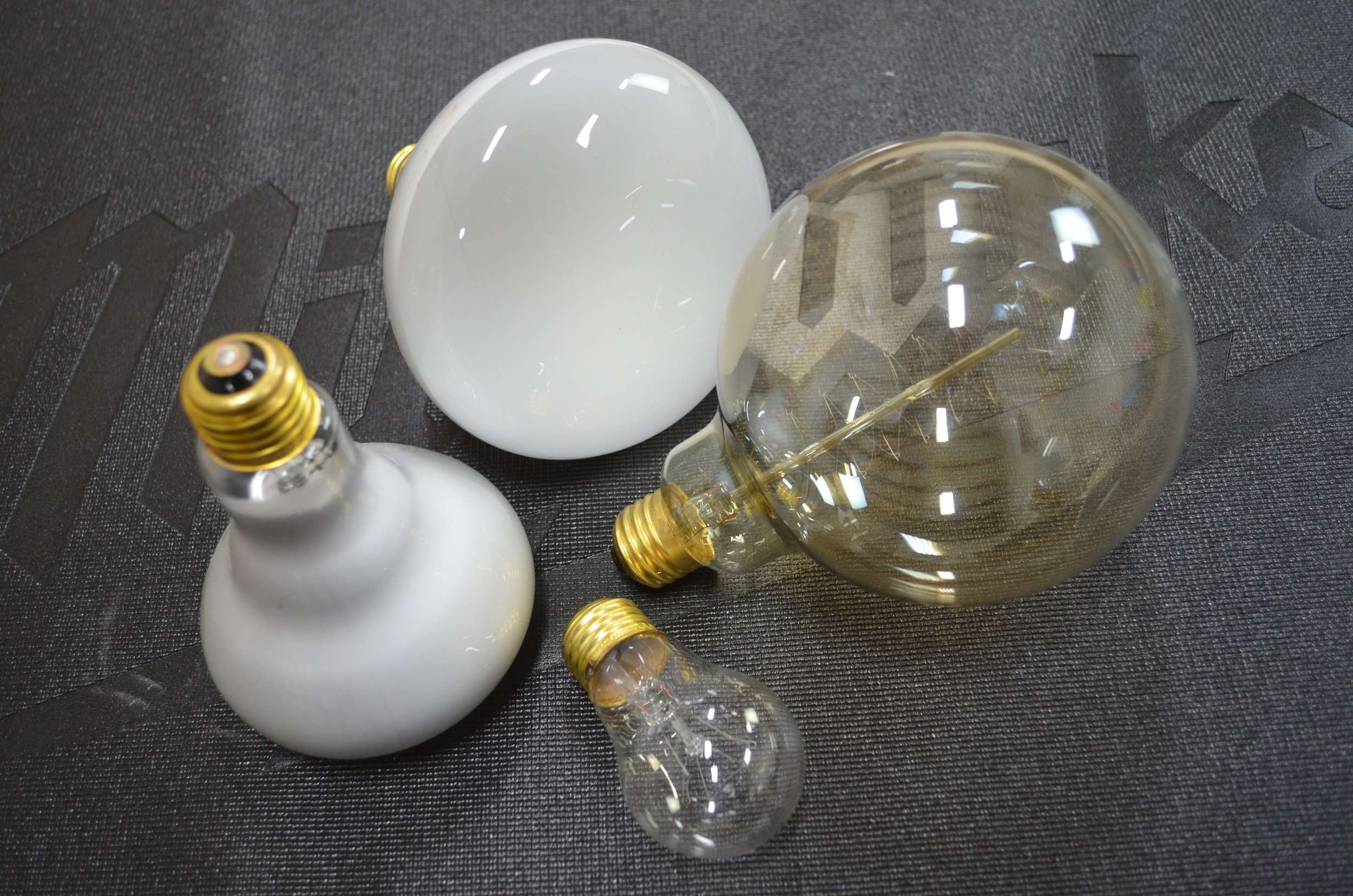 Incandescent lamps are probably the most known lamps out on the market. When the average person thinks about a light bulb, they tend to imagine an incandescent filament bulb. Incandescent lamps have been used for decades to illuminate homes, roads, businesses, and much more. They were the most widely used lamp of the 20th century as they led the way in illumination from the origin of the light bulb until now.

Incandescent bulbs use a tungsten metal filament on the inside, that has a certain amount of resistance from one end to the other. When you send current through the lamp this filament gets so hot that it begins to glow. This glowing is what the lamp uses to illuminate a room. Every type of lamp has some sort of inert gas on the inside that helps create a “jacket” around the tungsten filament to minimize oxidization. In incandescent lamps this gas is argon. Some other lamps like high-pressure sodium HID’s use xenon instead. 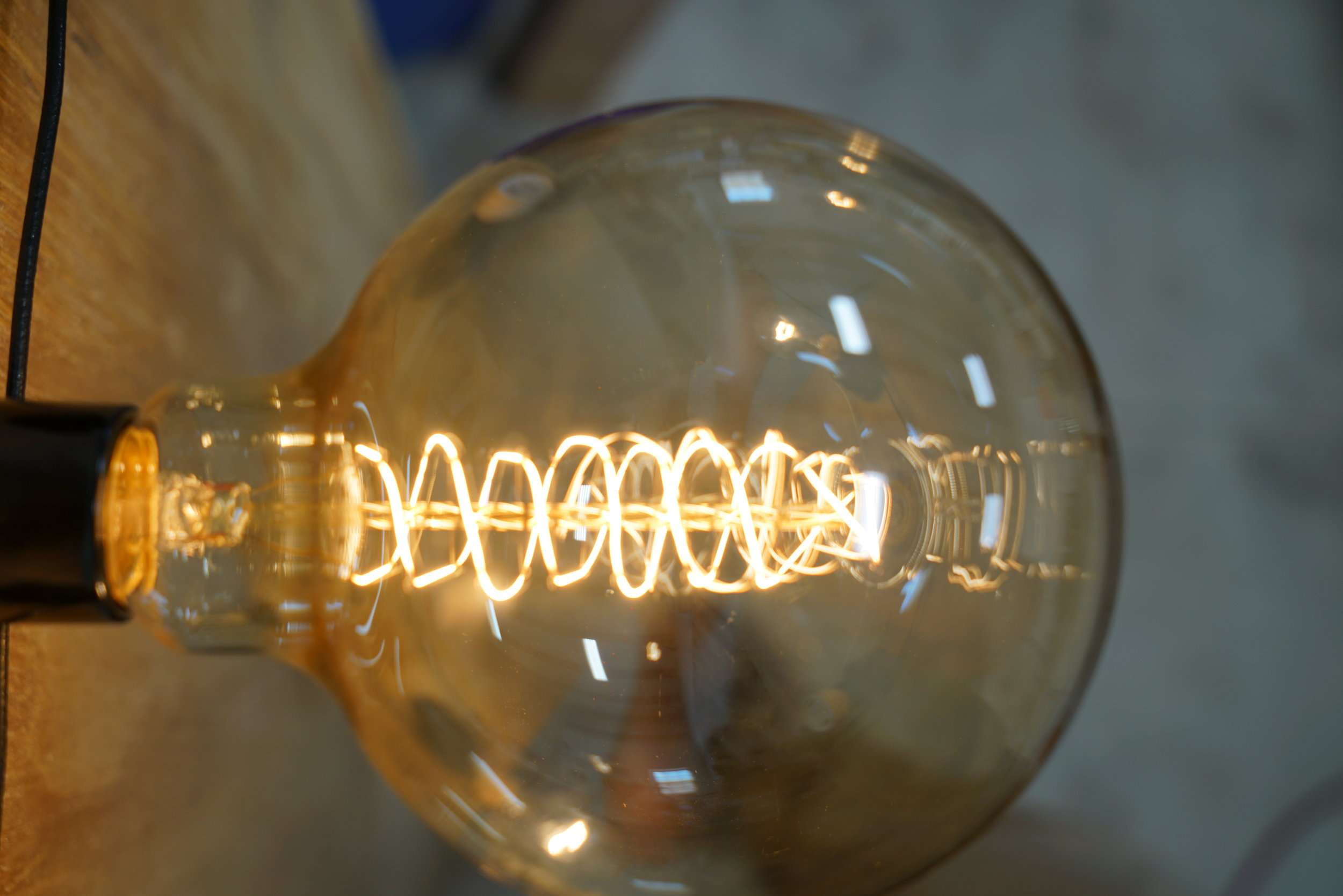 To find out if an incandescent lamps is good you can normally visually inspect the filament. If it appears broken then most likely the lamp is bad. If you’re unsure, or you have a frosted lamp, you can take your tester out and switch it to “continuity” and test from the metal tip of the bottom side of the lamp, to the metal screw-shell. You should hear a continuous tone from the tester. If there’s no tone, then more than likely the filament is broken and the lamp is bad. 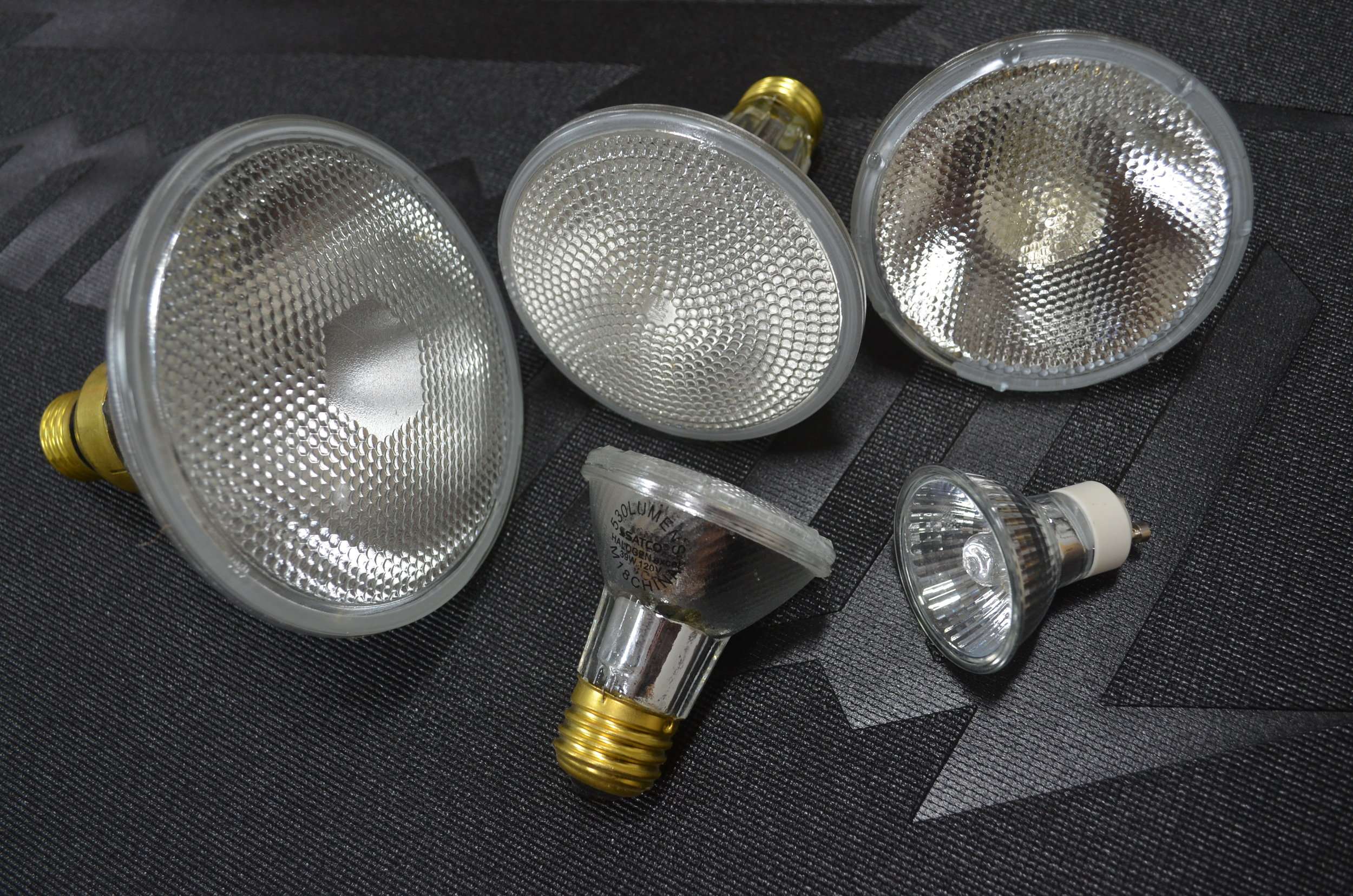 Halogen’s are a slightly different “family” of lamps than incandescent but they operate very similarly so often times they’re still considered incandescent light sources. A halogen lamp still has a tungsten filament inside of them, but they normally put this filament inside of an inner quartz tube deep inside the lamp. The quartz tube is typically filled with an amalgam of Halogen gasses rather than Argon. The halogen gas does a couple of things – it helps reduce breakdown of the tungsten filament and re-deposits the suit flaking off of the element back onto the element. The reason they’re designed this way is that a typical incandescent lamp wastes a lot of energy when illuminating. Designing a smaller filament with a smaller quartz tube, filled with Halogen gasses, allows a lot of that energy to be captured allowing the lamp to operate more efficiently.

The temperature inside of the quartz tube is extremely hot, and the glass surrounding the element is so close to the filament that it actually needs to be stronger than glass – so it doesn’t melt. This is why they make it out of quartz instead. 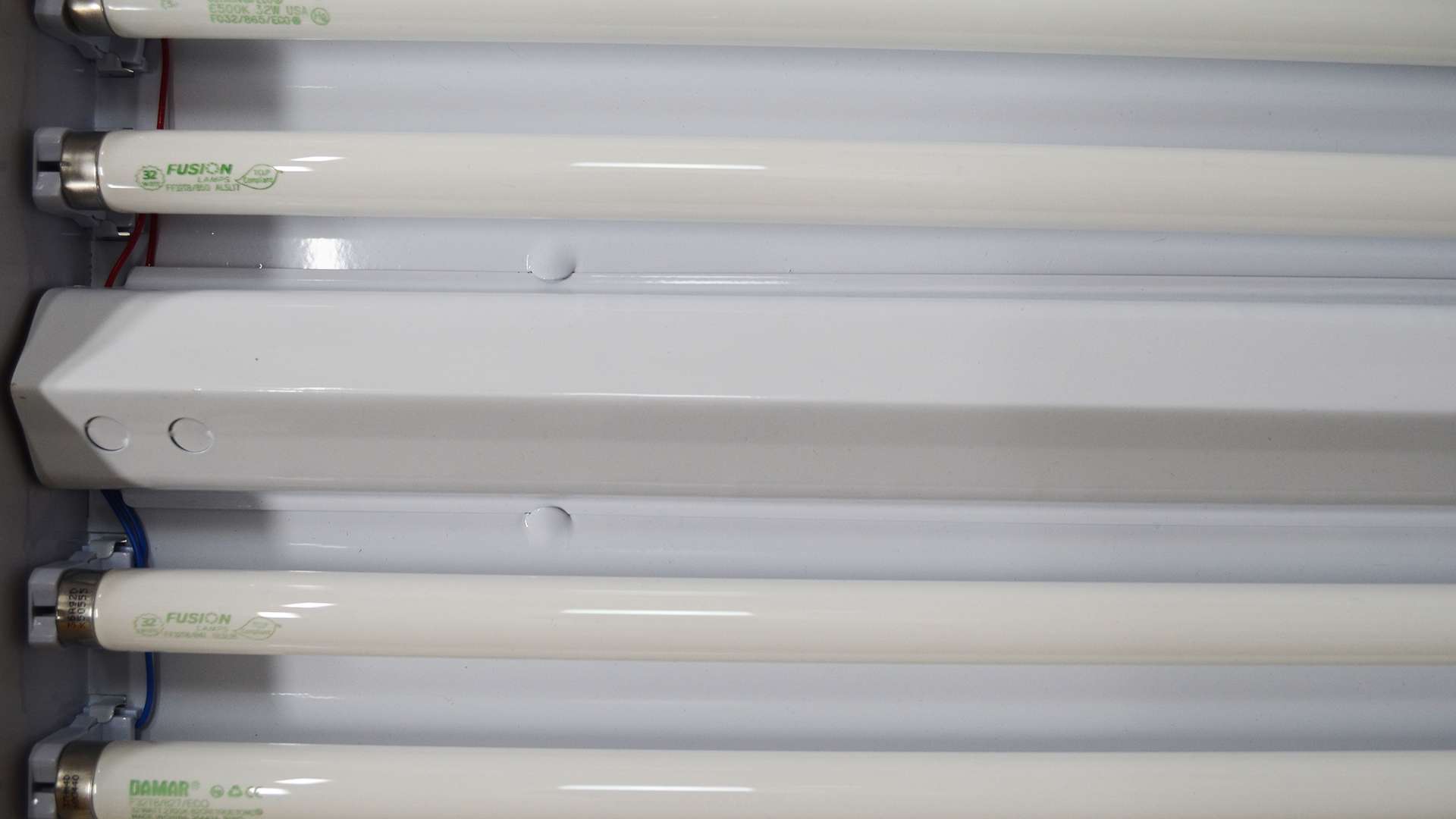 Fluorescent lamps are probably the next most-used light source on the market. These are used in kitchens, garages, shops, retail stores, office buildings, shopping centers, manufacturing plants, and much more. Fluorescents are very efficient lamps in that they don’t rely on a metal filament to glow, but rather strike an arc that is regulated by a ballast as the source of illumination.

When a fluorescent lamp ignites electrons are sent back and forth from one end of the tube to the other until an arc forms. Once this arc stream reaches a certain temperature a small deposit of mercury, inside the lamp, melts and vaporizes into the arc stream. This mercury creates UV light which is typically very bad radiation for a human to take on their skin. For this reason almost all fluorescent lamps are coated on the inside with a white phosphor powder. This does more than just sheild from UV radiation, it actually glows when it interacts with UV light. So fluorescence is a type of phosphorescence. It’s literally an arc stream that makes phosphor glow as a result of the UV radiation let off by the mercury arc stream inside of the lamp. Pretty cool huh? 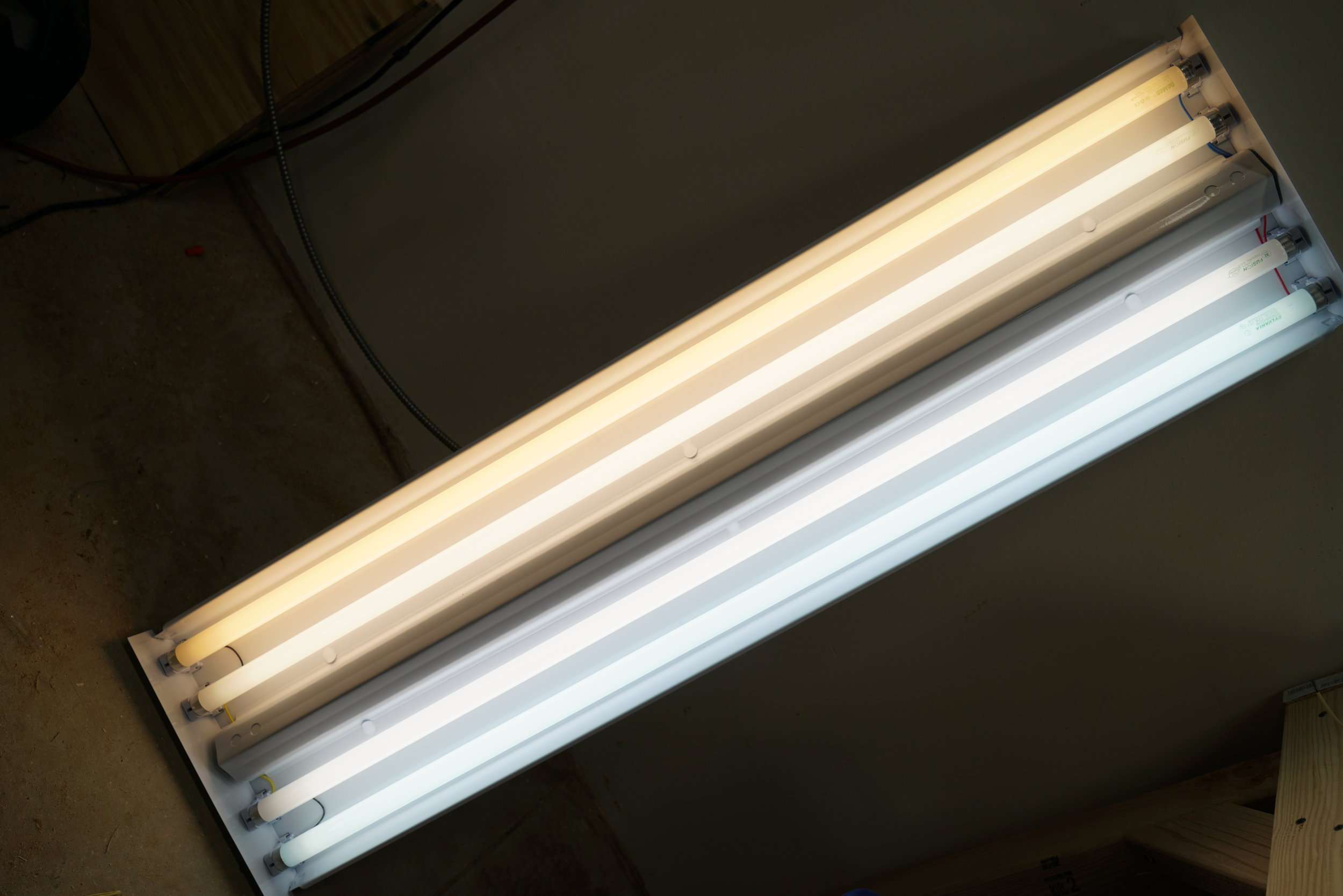 Fluorescent lamps can be found in many colors and types. Some of them are warm-start, some are cold-start. Many have different color profiles that can be achieved by changing which type of phosphor is used as a coating inside of the individual lamp. By mixing phosphors the lamp can achieve a green, blue, white, yellow, pink, and even black-light effect. 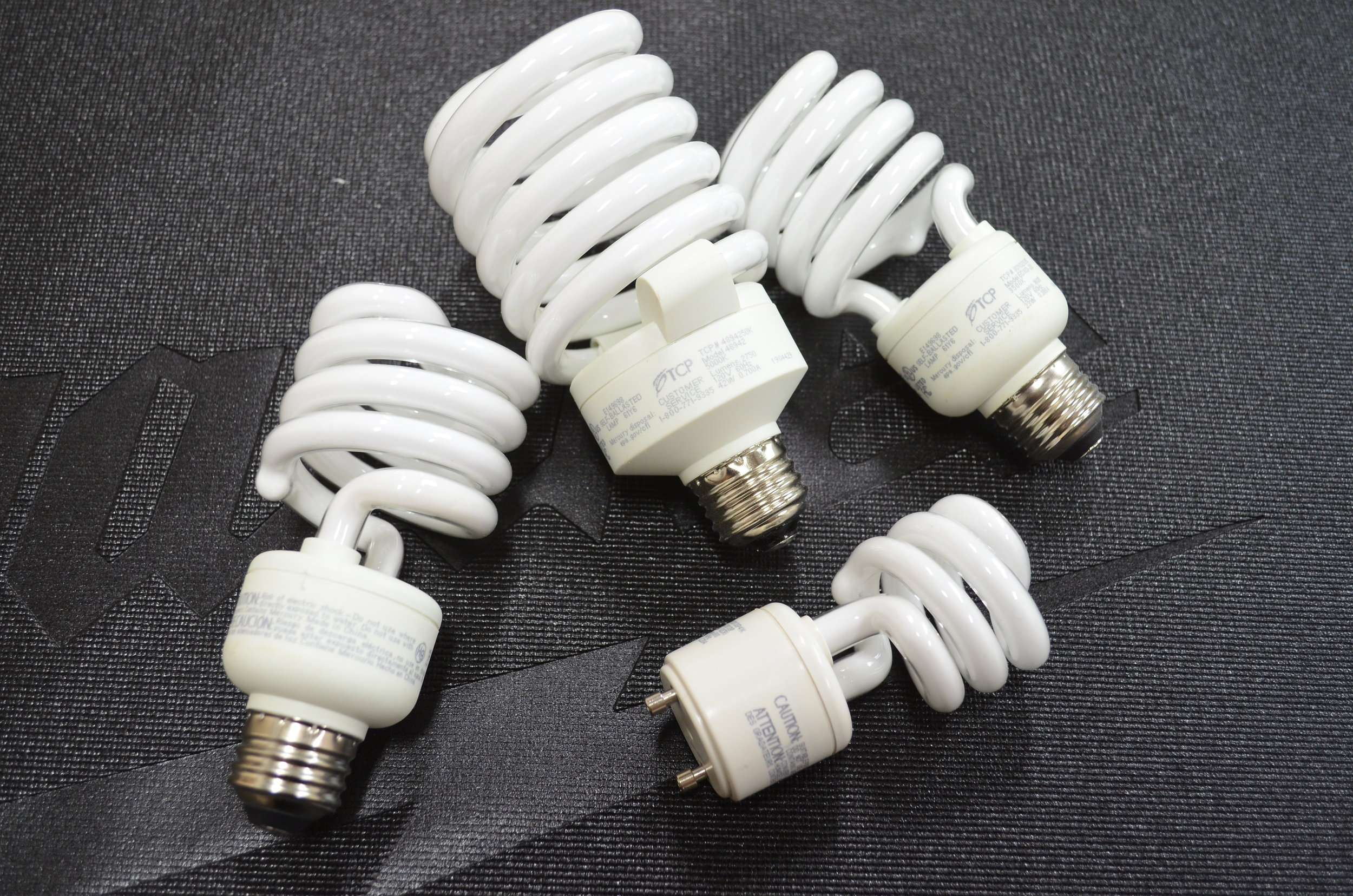 Compact fluorescent lamps are very similar to standard fluorescents, they’re just more compact and can be used as an incandescent replacement in most light fixtures. The operation of this light source is similar in function – they still start an arc on the inside of a tube, utilize mercury to vaporize into the arc stream, and rely on phosphor to glow. The big difference is the shape and size. The color profiles can still be adjusted by changing the mix of phosphor powder used inside, just like a fluorescent tube. The other big difference is that a CFL is self-ballasted. This means that the base of the lamp has its own ballast inside, rather than needing an external ballast like a fluorescent tube would need. 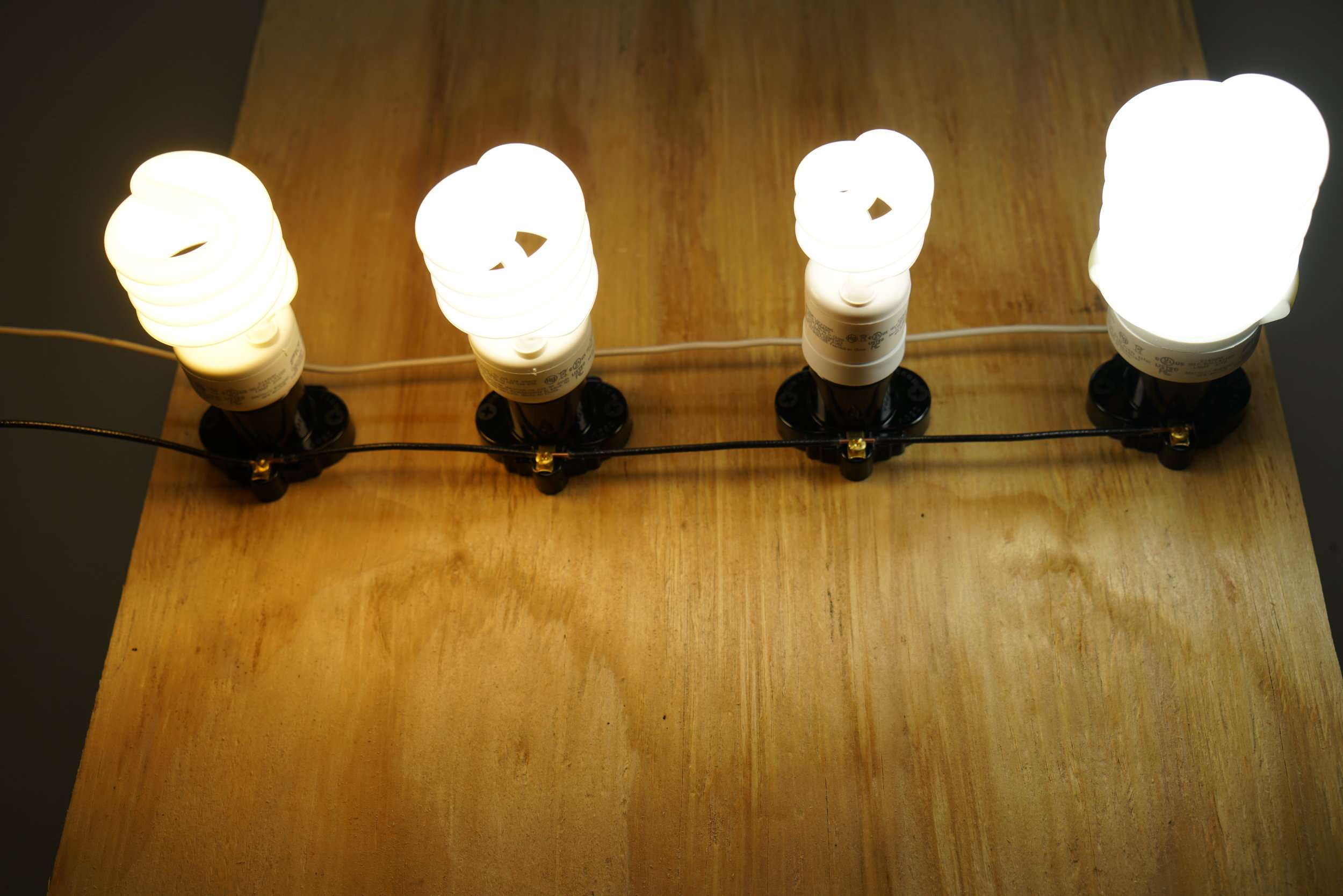 Typical CFL colors you’ll find are from 2700k-6000k, with the higher number being more white and the lower being more yellow. I’ll discuss kelvin ratings in a different episode but it’s very important that you match both the lumen output and kelvin color of these lamps when replacing old/broken ones in the field. 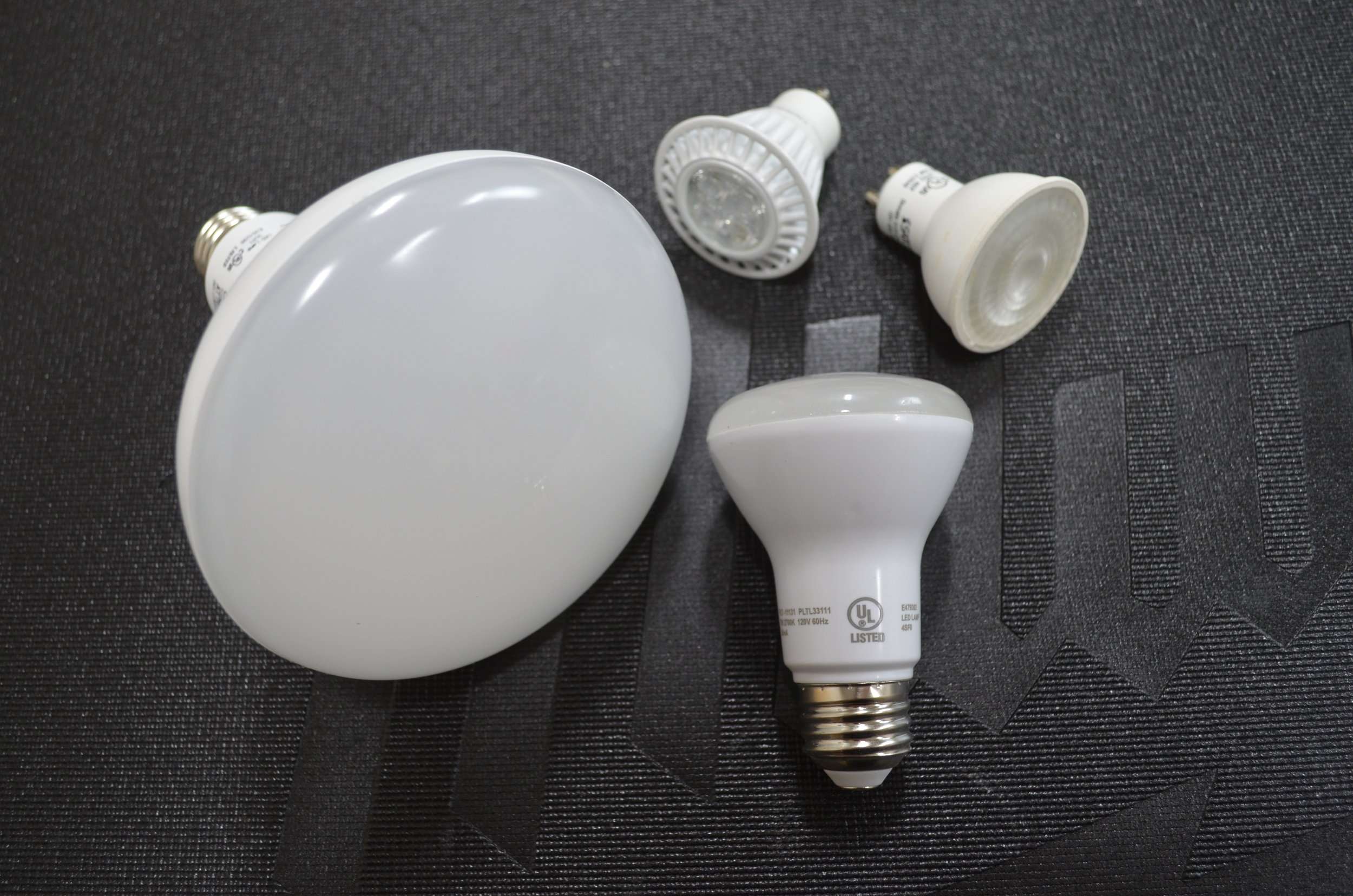 LED lamps are quickly becoming the new standard for lighting everywhere in the world. Regardless if it’s indoor, outdoor, residential, commercial, industrial, automotive, etc. The benefits of LED’s efficiency and longevity make it a far better investment than any other light source.

LED’s are self-ballasted (really self-driven), meaning that the ballast/driver technology is housed inside of the lamp rather than existing remotely. Drivers are used, rather than ballasts, to power LEDs and this is an important distinction to make. A typical ballast simply regulates current in a lamp, and offers some protection against voltage spikes but that’s the extent of the design. What makes a driver different than a ballast is that a driver does all of those things – but also it’s able to convert AC to DC while transforming the voltage from 120v to 12v.

Drivers can be remote or integrated in a solid-state circuit inside of the lamp. 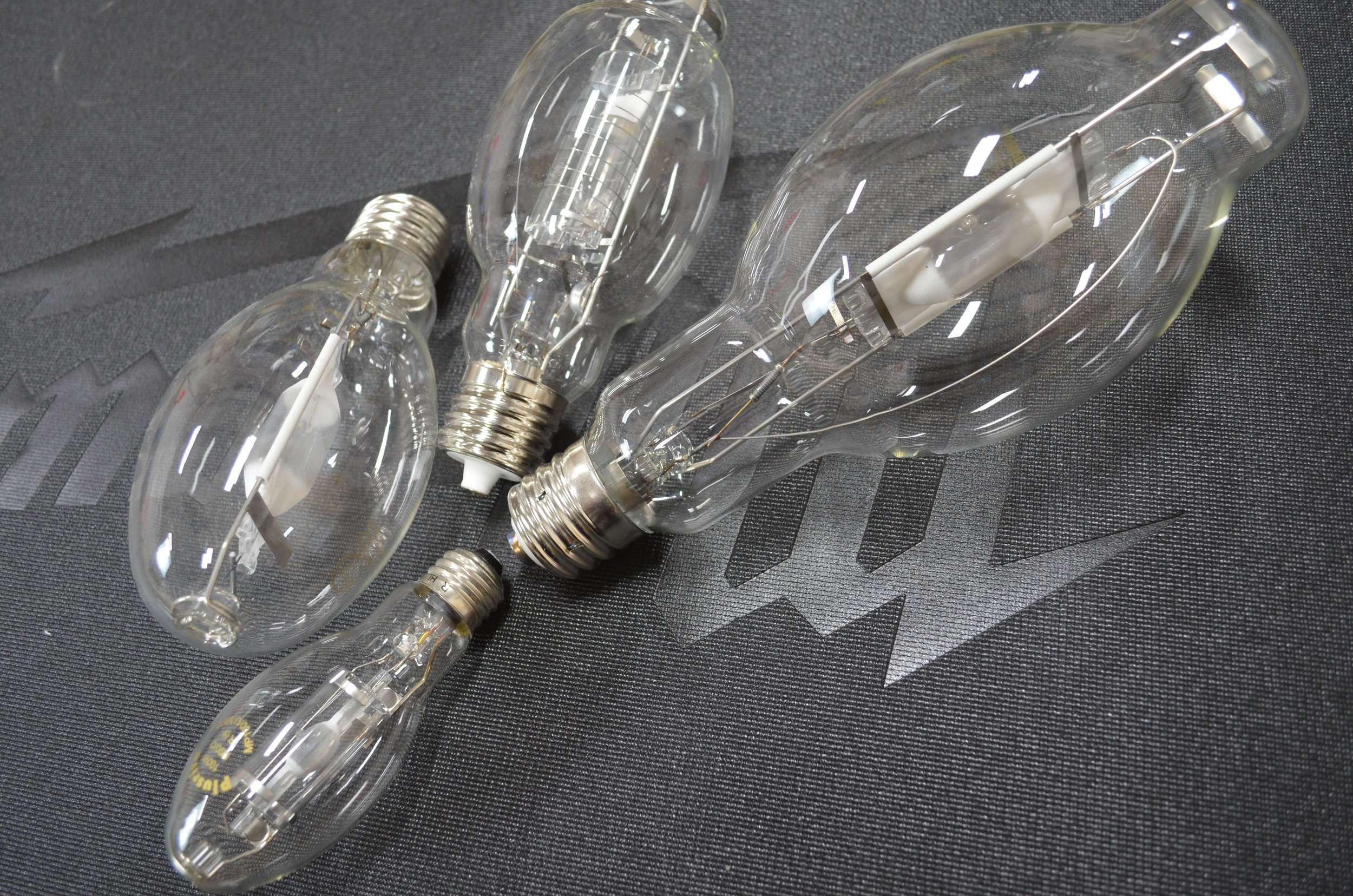 Metal Halide lamps are the first of 3 types of HID lamps that we’re going to talk about in this article. HID lamps (High Intensity Discharge) use pressurized gas inside of an arc-tube to illuminate an area. The inside of the lamp is typically composed of an arc tube, inside of which an arc is stricken from end to end. Inside of a metal halide arc tube is a small ball of Mercury that when heated vaporizes and enters the arc stream. This changes the arc to a bluish color and begins to emit UV light.

Once the mercury vaporizes there are little deposits of halide salts around the insides of the arc tube that begin to vaporize. Each halide salt has its own unique color, and operates at a unique temperature. Once all of the halide salts have vaporized and the temperature stabilizes, the blue UV light begins to turn white – somewhere in the 4000k color spectrum.

The tips of the arc tube are painted white to help reflect heat back into the arc tube. Some of these halide salts will only vaporize at a certain heat level, so re-depositing heat helps the lamp not shift colors while operating.

Metal halide lamps require a ballast and a capacitor to work, as do all HID lamps. 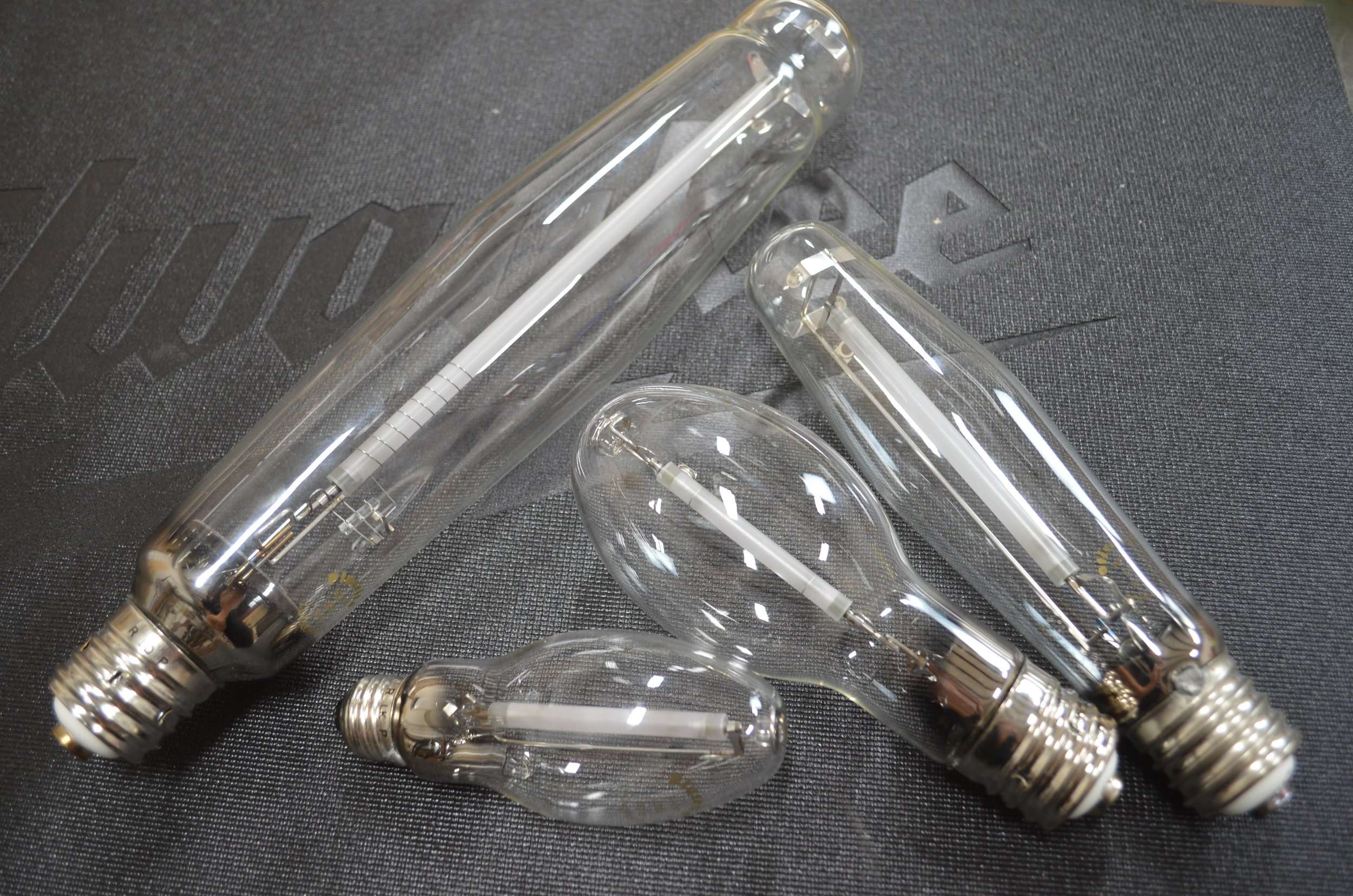 High-Pressure Sodium lamps operate similarly to metal halide in that they are also high-intensity discharge lamps. They too require a ballast to ignite an arc inside of an arc chamber, however an HPS uses a high-voltage ignition to strike the arc. This is because sodium is a lot higher temperature and pressure gas than mercury alone.

Even the arc tube of an HPS lamp is made of a different material to handle the heat of the sodium, as a simple quartz or glass tube would melt from the heat. These lamps are a lot more efficient than the typical metal halide or mercury vapor, however the sodium burns a yellowish orange color so the light output is more in the 2700k to 3000k color spectrum. 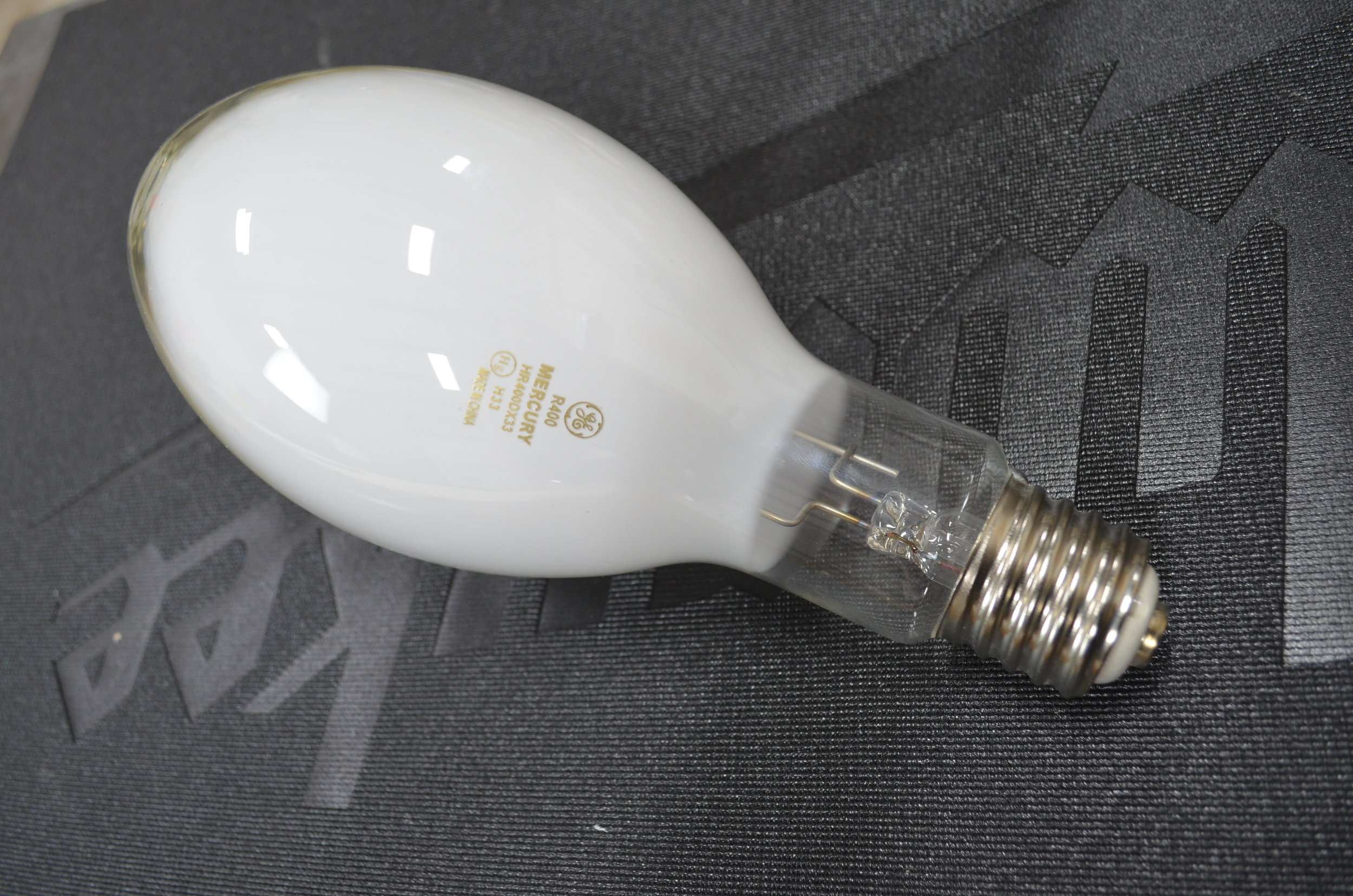 The last stop on the HID train is the Mercury Vapor lamp. These light sources are very similar to metal halides in a lot of ways, but still different in function. The quartz arc tube inside of the lamp is designed similarly to the metal halide, except there are no halide-salts in the chamber and the tube is not painted white on the tips. The reason for this is that the Mercury Vapor lamp uses only Mercury inside the arc-tube. There are no other gasses that mix to change the illumination of the light source.

Most mercury lamps that people see have a white coating around them. The reason for this is there is a phosphor coating on the inside of the outer envelope of the lamp that glows when introduced to UV light. If you remember from above, phosphor glows when introduced to UV light, which Mercury produces. So the Mercury Vapor lamp is essentially a high-intensity fluorescent light…kind of.

When MV lamps start they begin looking pink, then over 30-60 seconds start to warm up and show a pure white color.

Thats the essential lamp families that you’re going to come across as an electrician. There are of course many more styles and sizes within each family that you’ll see, but they all typically function within these base families. The only light source not talked about in this article/video is the NEON light. Neon operates the same way as a fluorescent for the most part, however the voltage is much higher and much more constant. There are still phosphor coatings which when mixed allow for different colors to shine. But they’re still functioning like a fluorescent or HID lamp so I did not make a separate section just for them.