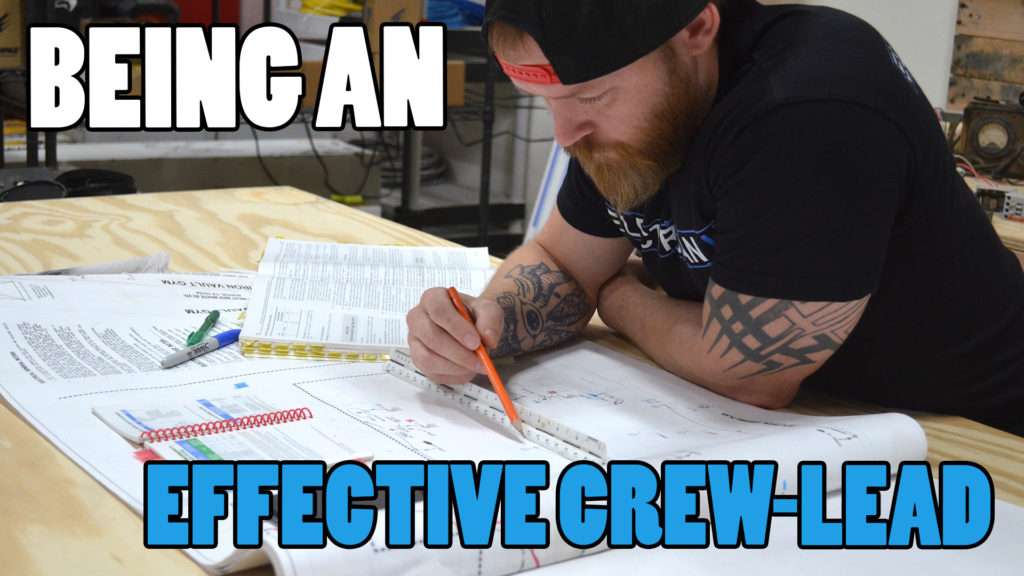 Most journeyman electricians end up leading jobs for the first time when they get their license, and for some it’s an overwhelming task that they feel is unmanageable. There are a lot of tips and tricks from the older leads that can be learned, and if taken seriously will make things a whole lot smoother.

As the crew-lead you’re the one responsible for the entire job that you’re on. You’re responsible for the people on it, the materials, the plan of action, and the efficiency and quality of how you and your team execute that job. You take on the liability of the company, the safety of the crew, and whether or not the company makes or loses money on the job. It’s kind of ALL on you.

It’s your job to make sure all of the materials are on-site and have all of the tasks planned so that you’re thinking out ahead of your crew as they work – ensuring they have everything they need to be effective throughout the day. It’s on you to delegate tasks to people based on their skill or knowledge level, and make a solid plan for how the job needs to be executed.

HOW TO EXECUTE THIS ROLL

Keep lists. As you first start out running crews, making lists is one of the best things you can do to stay on top of everything. This includes material lists, questions for the customer, tasks that need to be done, and any changes that need to be billed for.

I recommend getting on-site early and leaving late. It’s on you to have the plan and make sure it’s executed well so arriving before your crew gives you a little time to plan and look the job over before they arrive. Then when they arrive you can walk through the job with them and talk about your plan and how you want things done. Then when the day is finished stay a little late to check on everything and make sure the work everyone did is up to your standard. This is a good time to write down anything that you see that needs to be addressed the following day, and also lets you update your task list for the things you think y’all can finish tomorrow. It’s really just being good at planning and checking to make sure the plan is being executed well.

Walking the job with your crew before you start working is another great practice to get in the habit of. It lets everyone know the whole scope of the day, shows everyone the problems that may come up and how to address them, and lets everyone see the whole picture so they know what to do next if you’re not around. Rather than everyone just being reactive to the ONE thing they’re currently working on, it allows them to work more efficiently knowing how what they’re doing relates to everything else around them – including what the other people are doing.

As a leader you have the choice to have whatever demeanor or attitude that you want. I would think long and hard about this. Don’t be a fake person, or try to be something you’re not, but do think about how you come off to people. You could think everybody just “wants” to listen to you, and then you find out that’s not true at all when you start handing out orders. You also may think that nobody’s going to listen to you, then everyone does when you give them tasks. Until you start becoming aware of how you act and how others respond to you, you’re not going to be able to gauge your abilities as a leader. One thing I do recommend is DON’T BE A DICK…unless it’s warranted. The majority of people will work effectively and change behaviors with compassionate constructive criticism. Just tell them what they did and how to change it works, and you’ll see that as effective. However, there are some people that will purposely “buck” you, as well as some people that will continue to screw things up over and over no matter how much you tell them the right way. Not everybody acts the same, and some people need some heat and pressure applied before they’ll change. Be careful with this, most of the time you don’t have to get on peoples’ asses, but there are times that it’s necessary.

1) Make sure you don’t sluff-off that big, difficult tasks for last. Do all of the hard stuff first, while you’ve got energy to tackle it all. Otherwise you’ll get to the end of the day and you’ll be deep into a huge problem, running late, tired, and frustrated. If you tackle the hard stuff first, you can coast the rest of your day.

2) Double-check everyone around you. People will cut corners, and others will just miss things – we all make mistakes from time to time. You’ll be amazed at what you’ll find when going behind and double-checking the work of the people around you.

3) Know when to step in, and when to step back. As a new crew-lead you’re so used to working and focusing on what’s right in front of you. Now it’s your time to be the one with the plan, and it’s time to step back and keep everybody else going. Your helpers are your hands, and you need to be the brain. That’s not permission to be lazy yourself. You also need to know when its your turn to step in and handle business when that time comes.

4) Don’t be afraid to call people out, and don’t be afraid to be called out. Many people don’t know how to get on to someone for screwing off, doing bad work, being lazy etc…and it’s a skill that needs to be developed over time. But most people also have a hard time taking criticism. Be sure you’re humble and you can accept when someone calls you out. As a crew-lead everything rests on your shoulders, so have strong enough shoulders to handle some adversity.