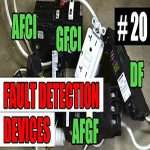 GFCI’s are devices meant to detect and clear a ground fault.  Ground Fault’s are exactly as they sound – faults to ground.  A fault means a “wrong-doing” or “responsibility for an accident or misfortune” So a ground fault is literally a wrongdoing in an electrical circuit, where an interaction occurs between a hot (un-grounded) conductor, and a ground (grounding conductor).

Ground faults can be very dangerous if there is no ground fault protection.  If there is too much resistance built up in a circuit current traveling on the ground (grounding conductor) will not trip a breaker and clear the fault.  So a person can be introduced into the circuit and get seriously injured.  Say a person is in their garage and their washing machine overflows.  They open it to take the clothes out and do not realize that a hot (un-grounded conductor) has come loose in the machine and is laying on the casing of the washer.  Due to improper equipment grounding and/or bonding methods, the breaker does not trip.  There’s water all over the floor, the person is barefoot standing in a puddle and goes to open the metal washing machine.  That person has just completed the circuit from their hand to their feet, through the water, through the concrete slab and back to the panel.  Current just found a far easier (less resistance) path back to the source and this person is now hospitalized for severe electric shock.

For more information on where GFCI protection is needed to safeguard personnel, check out Article 210.8 in the 2017 National Electrical Code…..