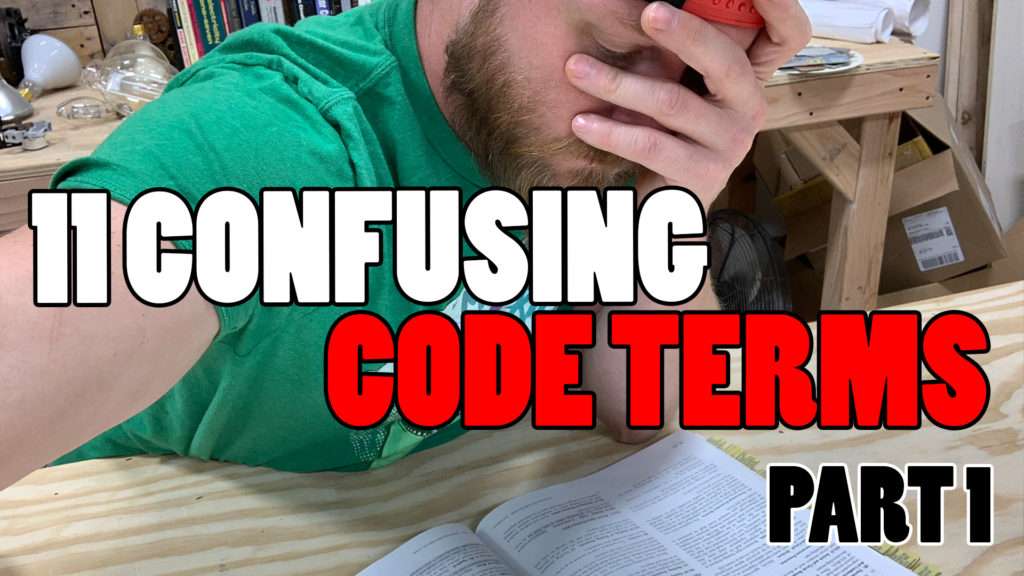 Let’s face it…the national electric code book is probably the most difficult construction document to read and understand. It’s written like a court document in legalese, using terms none of us use in the field, for the sake of liability and C.Y.A. These are 11 terms that are used in the NEC that I feel people struggle with understanding when they first buy a code book.

Grounded conductors are the exact opposite of ungrounded conductors. Grounded conductors are what we in the field call a “neutral.” This is the white wire in a 120v circuit (US). The reason this is called the grounded conductor is that in the transformer where power is being derived, there is a coil (there may be several) of wire. One end of this wire is one of our hots (ungrounded conductor), and the other side of that same coil of wire is where our other phase comes from. So we get L1 and L2 (240-volts) from one piece of wire shaped into a coil. Well when you take the mid-point of that coil and bolt another conductor to it, that middle point is what we call the NEUTRAL POINT. We can hook a conductor to this and bring it down to the earth to ground it. So now we have a responsible reference for stable voltage, and have mechanically attached it to the earth so the earth is at the same potential. This also provides us with a half-voltage between L1 and L2’s 240-volts – so we can have 120-volt circuits as well.

Equipment grounding conductors are the conductors that connect the metal housing of equipment back to to the neutral (grounded conductor) at the service. This is the, typically green or bare conductor (US systems) that we call out in the field…the ground. These conductors are sized based off of the breaker ahead of the equipment and need to be run in a way to ensure a low-impedance path for fault-current to take in case something bad happens in an electrical circuit.

A ground fault is an accident, we’ll just start with that. It’s when an ungrounded conductor (hot) comes into contact with a piece of metal. This piece of metal will become energized if it is not intentionally grounded. The reason we ground the metal enclosure of equipment is so that if this happens, that equipment doesn’t just sit there energized while someone walks up, touches it, and gets shocked. If we ground the equipment, it allows the current to return to the neutral, completing a circuit which assists in tripping the breaker for that circuit. I cannot express enough, the importance of proper grounding and bonding. A lot of electricians don’t understand the dire importance of ground-fault protection.

This is an easy one to grasp, especially if you read the paragraph above. A GFCI device is a special device designed to disconnect the incoming line-side conductors from the load-side conductors going out to a piece of equipment – WHEN there is a ground fault. They do a very good job of detecting faults to ground and help save lives and equipment.

Arc-faults differ from ground-faults in a key way. They’re still “accidents” that should be prevented, but rather than having a solid connection between an ungrounded conductor and a grounding conductor an arc-fault is a literal arc between two things that should not have an arc between them. This could be a loose termination, an air gap between something, a damaged conductor or piece of equipment, etc. There are a lot of reasons that arcs occur, but they’re very dangerous and cause many fires every year. They can ignite fibers and gasses, they can heat up to a point of insulation-breakdown and cause a short, and much more. Series arc-faults occur between two points on a circuit that are in series with one another. Parallel arc-faults are between two circuit conductors such as “line to line,” “line to neutral,” or “line to ground.”

As you may be able to guess by now an AFCI is a device that helps open a circuit when a dangerous arc happens. There are a few different styles, and rules to go by when installing these types of devices, which I will not get into here. But AFCI devices do an incredible job saving lives and pissing off electricians who can’t figure out why these sensitive breakers keep tripping left and right! Hahaha, you’ll get it my dude…just work with them more often and it’ll all come together. 🙂

A short circuit is literally when current takes a “short cut” to get from the source, back to the source. If you have a hot and neutral run from a panel to a load (let’s say a motor in this case”), the conductors we run are connected to the load. This load has properties which make current slow down to a manageable level and heat is controllable because there is work being done. However if we were to melt away part of that black and the white conductor half way down that wire and let the two pieces of copper touch each other, there would be a short cut happening. No longer does the current have to go all the way through that load to make it back to source, it can get there easier now. Now current doesn’t just take what path it wants to, it takes all paths it can. Just like water. The problem with short circuits is that they allow an immense amount of current to flow, and heat to be generated at one time. That’s because there’s no obstacle in the way to slow that current down to a manageable level. So shorts are dangerous and unwanted.

A receptacle is a device that is plugged INTO, that power can be taken from. It has “female slots” that receive “male prongs,” totally not getting into the gender debate with you here, but you get the idea. It’s a device you install into an outlet box so that dummy’s like me can stick an extension cord into. Lot’s of people call these “plugs” here in the state, but even that’s wrong. Plugs are the male end of a cord that go into a receptacle. I know right, you have to relearn everything you think you know lol.

This is a funny one to get used to, but not difficult to understand. The yoke of a device is the metal strap of from that essentially holds the device together and allows it to be installed in an outlet box. There can be multiple devices on one yoke, which need to be accounted for when doing box-fill calculations. For now just know you’re going to misspell it “yolk” when studying for your exams, and no…that’s that yellow thing inside of an egg. You got this, I have faith in you. Y-O-K-E.

WATCH PART 2 OF THIS SERIES IN EPISODE 40