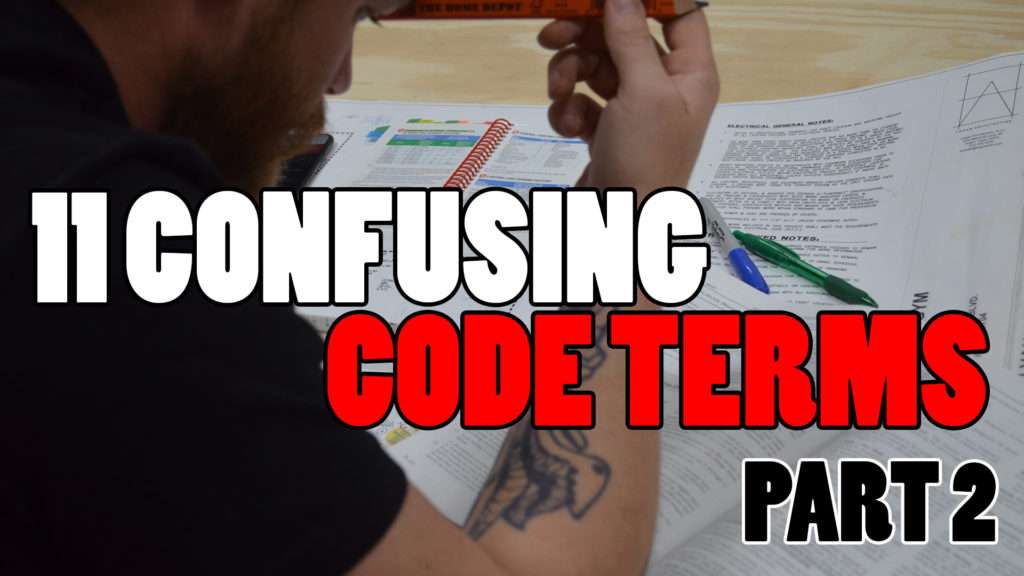 Let’s face it…the national electric code book is probably the most difficult construction document to read and understand. It’s written like a court document in legalese, using terms none of us use in the field, for the sake of liability and C.Y.A. These are 11 more terms that are used in the NEC that I feel people struggle with understanding when they first buy a code book.

Multi-wire branch circuits are similar to standard branch-circuits in that they originate at a breaker and feed outlets. However they differ becuse they have 2 or more circuits in the same cable assembly/conduit. An example of this is 12/3 MC cable. 12/3 has 2 hot (ungrounded) conductors feeding from 2 breakers on different phases, both independent circuits, and a neutral (grounded) conductor all in the same run. Both hots share one neutral. Another example is 12/4 NM (Romex) cable. 12/4 has 3 hots, and one neutral. The benefit of this cable is that several circuits can be run in one cable, rather than running several different cables.

Feeders are one step back from branch-circuits when thinking about a typical electrical system. They are the conductors between the service disconnect and the next panel in the series. This includes anything along that run that is intercepted by equipment such as transformers, disconnects, etc. Feeders go from a breaker to another breaker, including any portion going to anything in-between. Really feeders are everything that is not a branch circuit, or a service-entrance conductor.

Service-entrance conductors are those that tie into the utility service-point, in either an overhead or underground service, and run to the main disconnect at the service. These are the first conductors run to a building/structure that we deal with as an electrician. From this main disconnect, any conductors that leave this service panel are either feeders or branch circuit conductors. Many people mistakingly call appliance conductors for furnaces and ac’s feeders, however these are still branch circuits. Feeders begin at a breaker and end at a breaker.

Grounding electrodes are conductive materials installed in the earth, that help to form a bonded connection between earth and the electrical system. They have a conductor (grounding electrode conductor) that bonds the electrode with the equipment grounding conductors and neutrals (grounded conductors) at the service. It’s extremely important that all of these components are bonded together to keep all of them at the same potential. Grounding electrodes can be many different things, including ground-bars, ground-plates, metal water-piping, and rebar in a concrete slab.

An overload is a condition or event in which a piece of equipment is being used in excess of it’s rating. Let’s say a motor is designed to spin at a certain RPM (rotations per minute), and we put a large strain on the motor by physically preventing the rotor from spinning freely as it’s designed. This motor has the same voltage applied to it either way, yet it will begin to draw more current than it is rated for because it is bound up. This adds more current to the conductors and can reach the point of excessive heat, causing the insulation around the conductors to melt which could create a ground-fault or short-circuit, and possibly even destroy the motor. At this point the motor is “overloaded.”

A load on a motor is what you do to that motor to interact with it while it’s spinning. For instance if you have a conveyor belt that is run by a motor, and you start adding 100lb bags of concrete to the conveyor belt, you are increasing the load that this motor has to carry. At a certain point – too many bags of concrete can be on this conveyor causing the motor to become overloaded, and over-heat as a result.

Overcurrent is often confused with overload, and they do have something in common but they are different things. Overcurrent just means “any excess current beyond the rating.” It’s referring to the actual quantity of amperes in the conductor. An overload is an event – something is happening to cause a motor to overheat. Overcurrent is what’s happening inside the conductors run to the motor, because of this problem (overload event). Overloading a motor can cause overcurrent, however overcurrent cannot cause overloading.

WATCH PART 1 OF THIS SERIES IN EPISODE 38

Always remember that an Overcurrent condition is also a Short-Circuit, Ground-Fault, as well as mentioned in the video as Overload. Overcurrent can be a result of all three of these conditions.