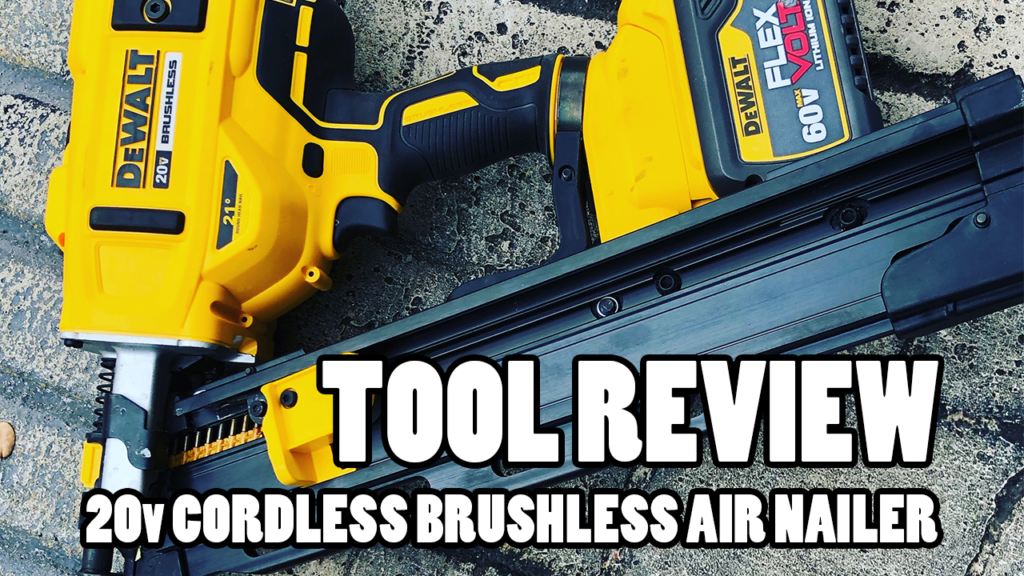 I’ve been waiting for a long time to test one of these battery-powered framing nailers out. For quite awhile the only thing on the market has been cordless brad-nailers or trim-nailers, but nothing for full-sized framing nails. Well, DeWalt has changed the game yet again! 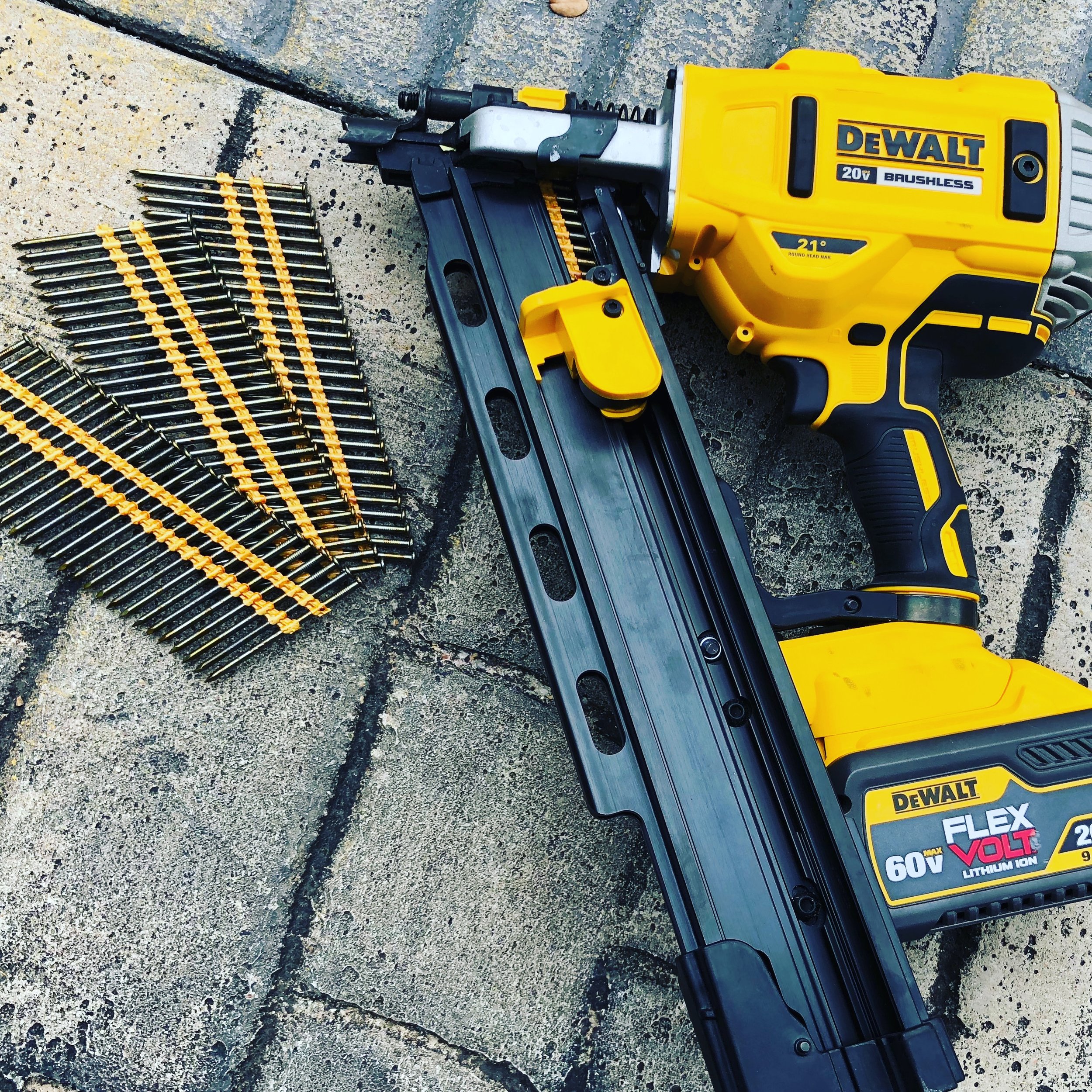 When I picked this framing nailer I was surprised to feel it is a little lighter than most pneumatic nailers. Not by much, but the compact size of the tool makes it feel lighter in the hand as well. There’s a lot of thought that went into this nail gun so lets break down the features. 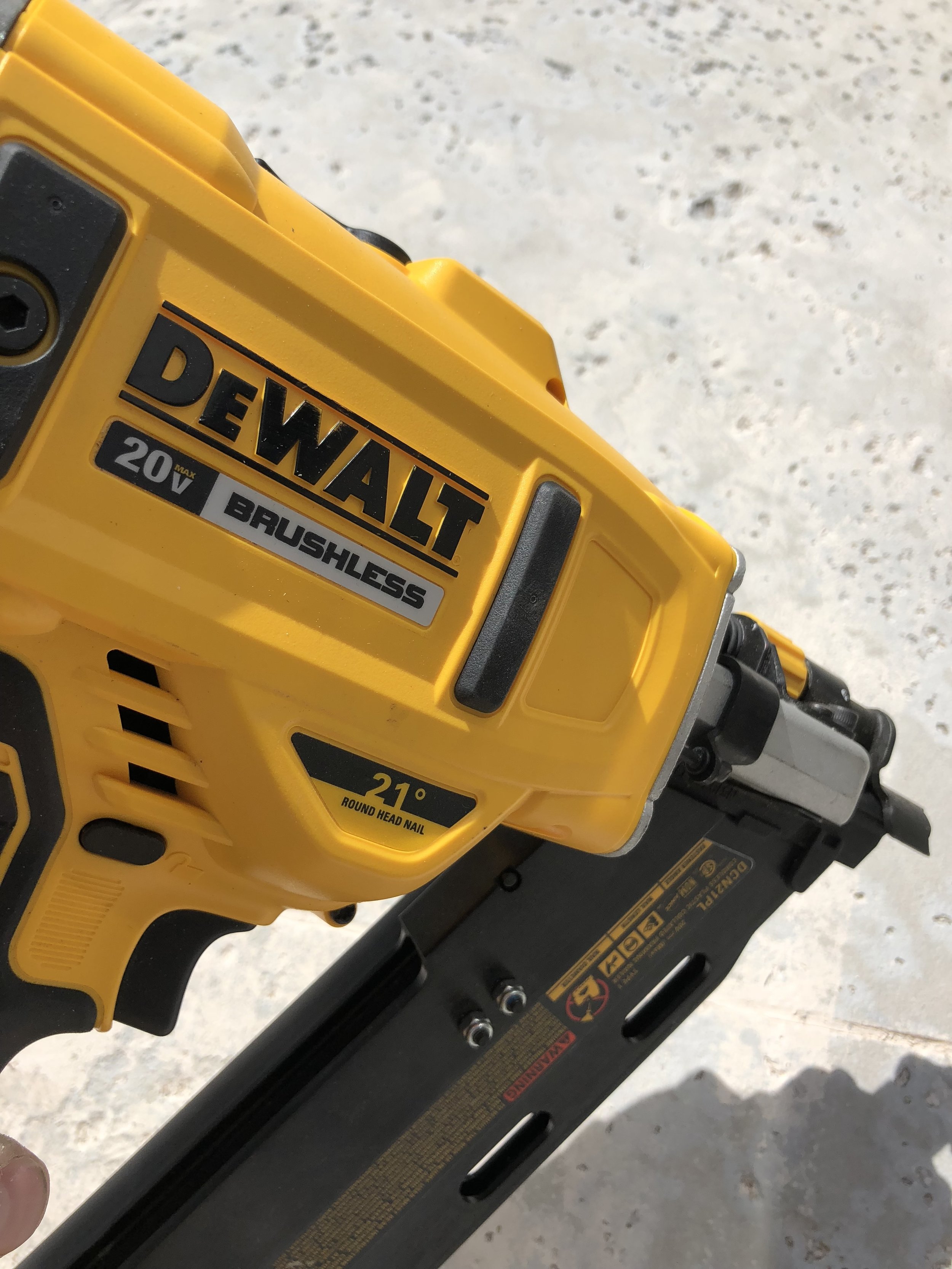 First off I noticed that it is a 21 degree nailer. This means that it will only accept 21 degree racks of nails. For those out there that don’t know, there are other racks of nails that have different angles, like the popular 30 degree nailers would use. I have no preference either way, so for me the 21 degree setup is fine.

I was able to run the tool from a standard 20v lithium ion battery pack, as well as the new Flex Volt 60v lithium ion batteries. This does not mean that the nailer will operate at 60 volts, it simply means that the 60-volt batteries are backward compatible with the smaller 20-volt tools. For instance the 9 amp/hour 60volt battery pack will sense the tool is a 20 volt tool and will still operate, only on 20 volts rather than 60 volts. This means a 9 amp-hour battery will last you a very long time under the same load. 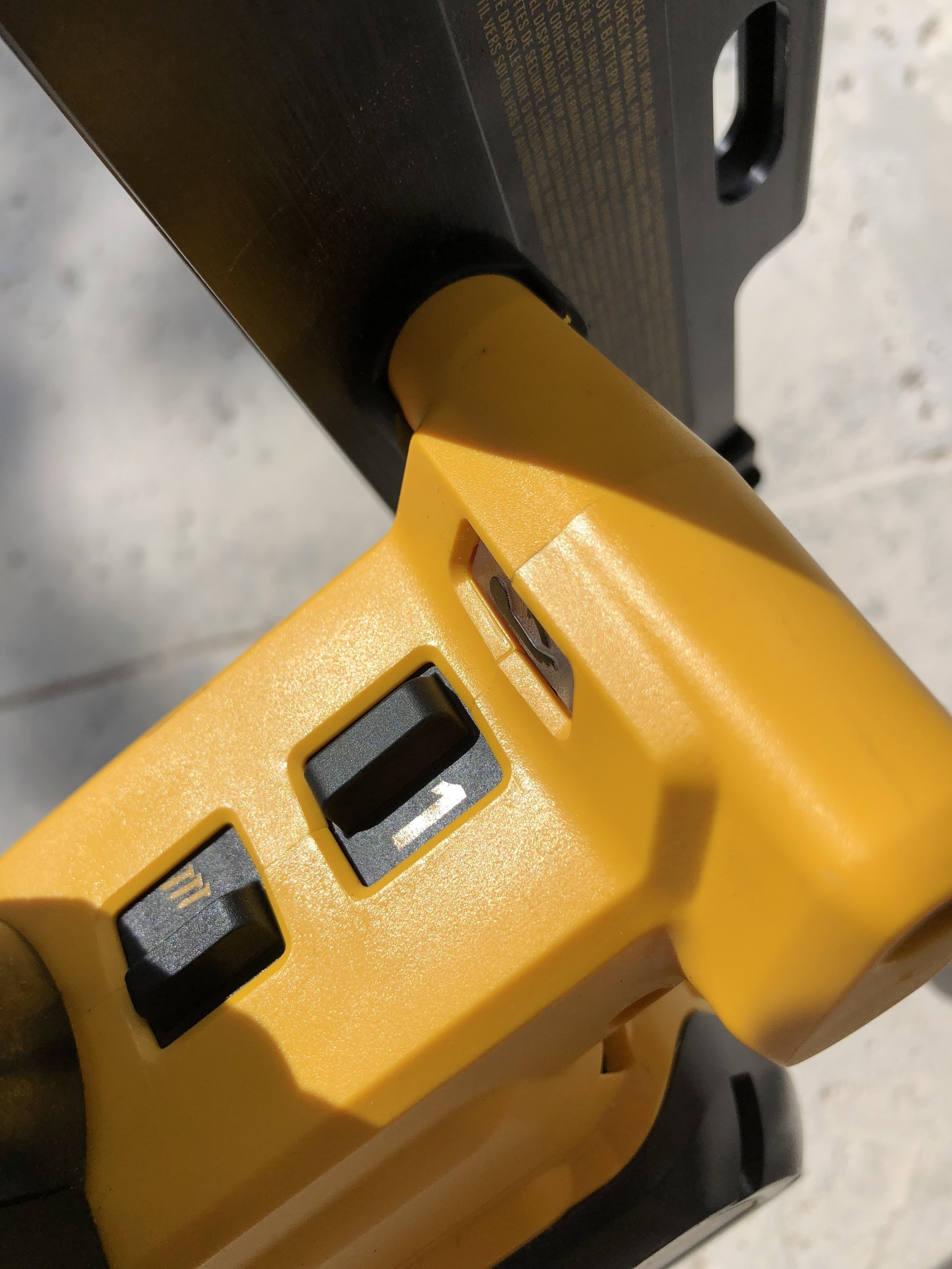 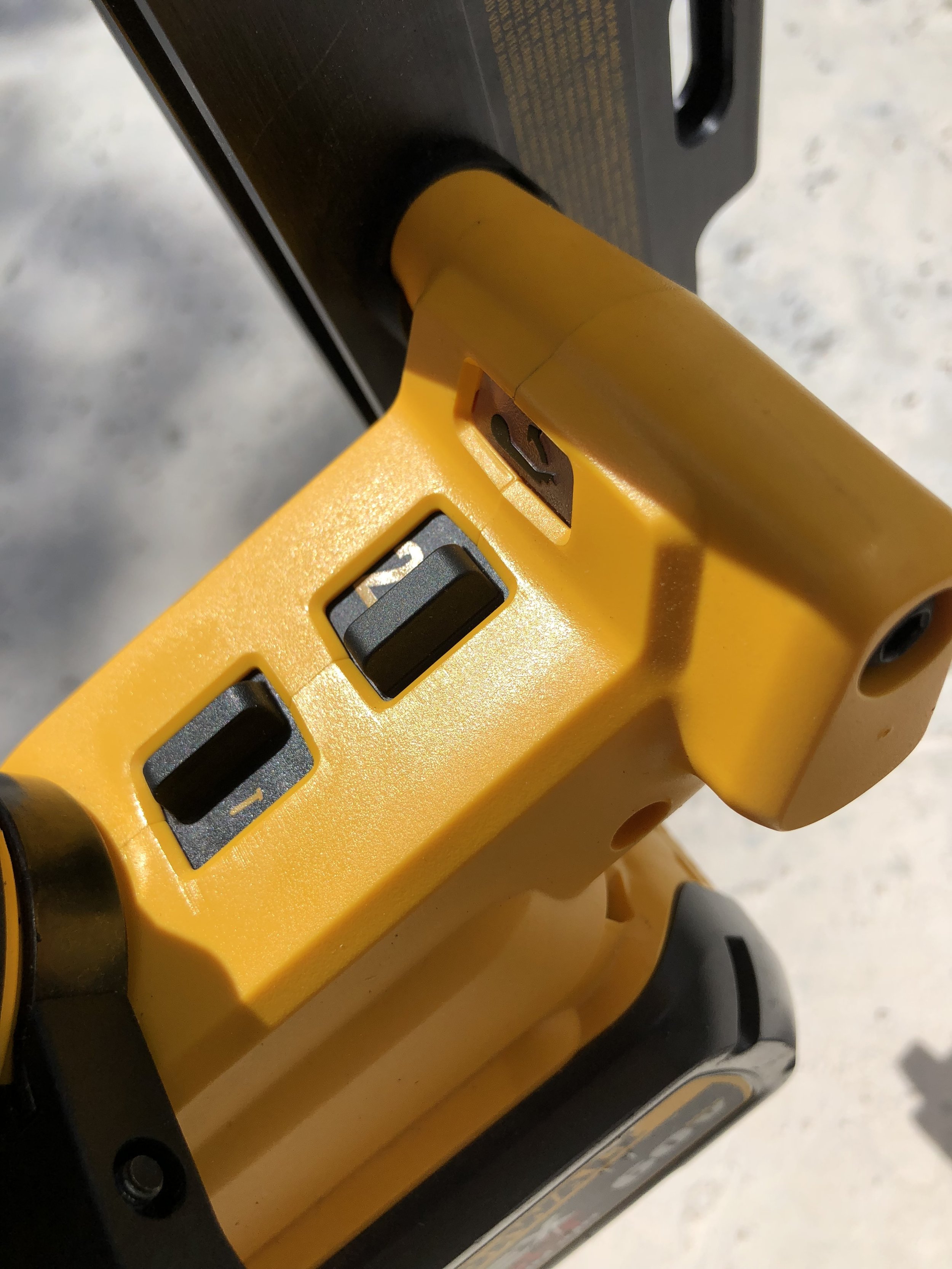 Not only will this nailer simply shoot a nail, it allows you to adjust the sensitivity of the driving force so you have control over how deep the nail will penetrate. There is a small adjustment knob near the mouth of the nail rack that puts more or less tension on the driving spring that opens and closes when shooting a nail. There’s also an AWESOME second feature that gives you even more flexibility in driving force – that is a speed selector just like a drill has. There are 2 power levels numbered “1” and “2”, and just as you’d imagine “1” means lower power while “2” means more power. This helps when you’re nailing soft vs hard wood, or a combination of the two.

In the same area as the power selector you have a selector that allows for a single nail to be shot regardless of what’s happening with the trigger, or multiple nails to be shot in “bump” mode. In bump-mode the motor stays spooled up while you hold the trigger so you can keep bumping the mouth and shooting nails faster. Single mode only shoots one nail, then the motor shuts off until you press the mouth against a piece of material again.

There’s a plastic hook on the tool so you can hang this from a belt loop or a structure/ladder. The tool comes with its own allan wrench for adjusting/fine-tuning and the wrench has a built in slot in the tool so you won’t lose it in the bottom of your truck or van.

The one down-side I see to the design of this tool (even though the though really counts) is that the tool senses when there are only 3 or 4 nails remaining in the rack and stops working on purpose. The idea here is that most pneumatic nailers have jamming issues when only one or two nails are left in the rack, so Dewalt decided to make the tool sense when this could be a possibility. That kind of sucks but it’s also kind of awesome at the same time. It sucks because you have unexpected stops when there are still nails in the tool. Imagine having a gun that stopped firing when the magazine only felt 3 rounds left in it. Silly right? It’s good on the other hand that it minimizes jams that could possibly happen due to a lack of tension in the tip (get your mind out of the gutter).

Now don’t get me wrong, this idea is not infalliable. Jams can still occur, even with this technology. There’s even a little release lever on the tool that allows you to pull back and release to try to clear the jam. The tool stopping when only a few nails are left is simply there to MINIMIZE those jams. 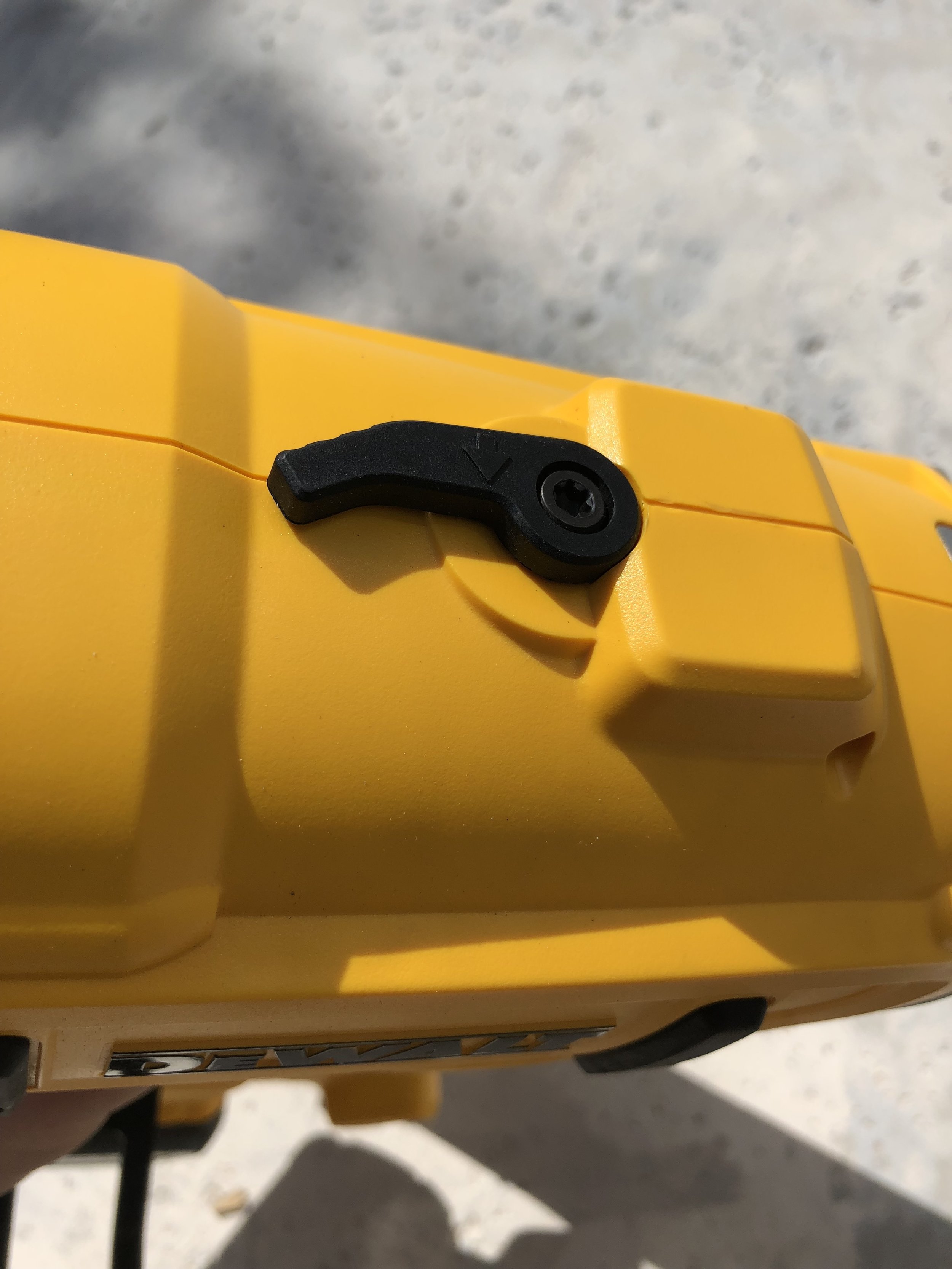 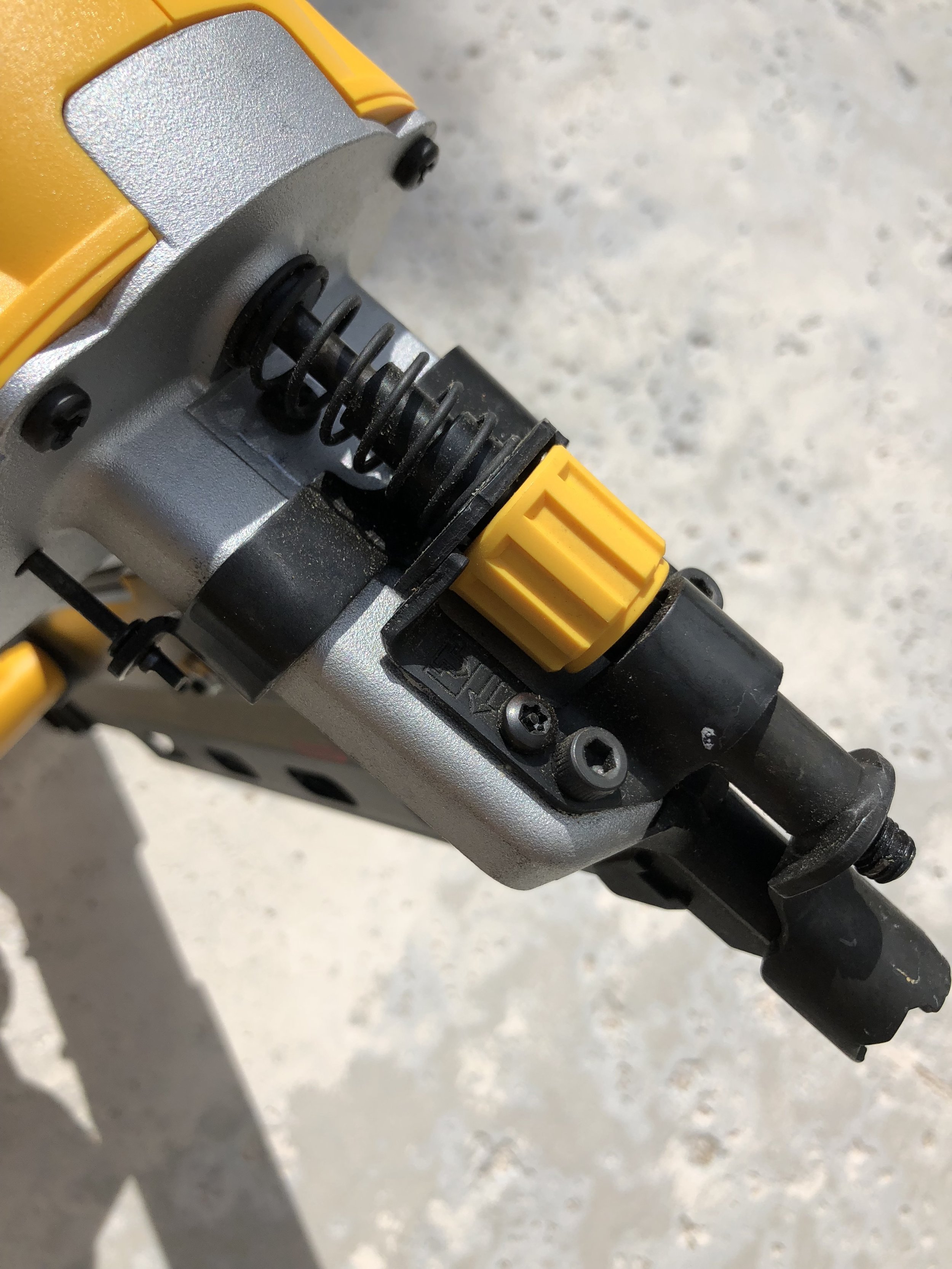 I can’t stop singing the praises of this beast of a tool. The power and flexibility of this nailer makes it a must have tool on my truck. No more swinging hammers above your head, while holding nails and blocks of wood. This tool takes care of it all. It will mate with any of your 20v or 60v Dewalt Li-Ion batteries and you don’t have to haul around a damn air compressor and hose all day long. Great job Dewalt, this is a 5-star game changer in my book!

For more detailed information on this nail gun CLICK HERE. 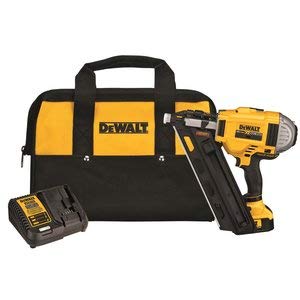 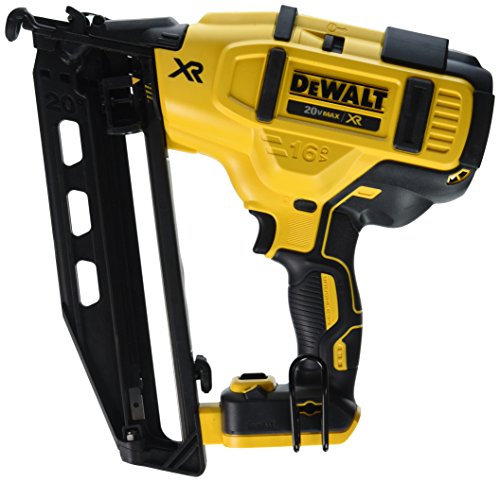 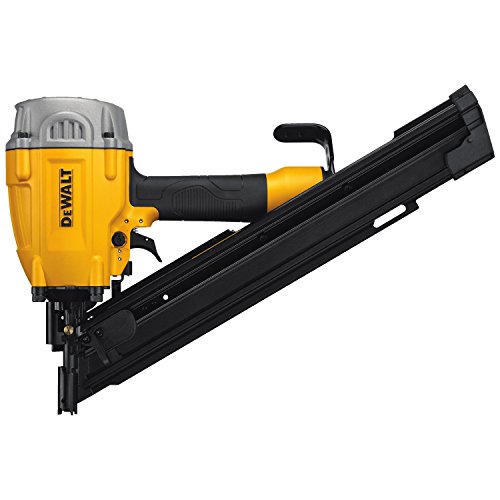