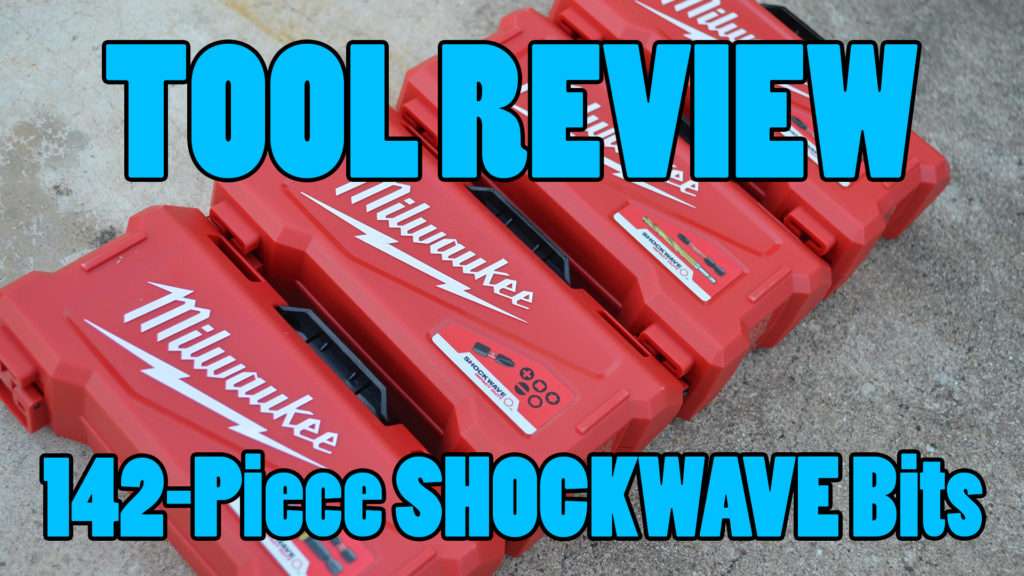 Today I got to test out the new 142-piece Milwaukee Shockwave impact duty driver bit set.  It is four small containers of a massive assortment of bits that are all in the Shockwave line and meant for use with an impact driver.  You can use them with a regular drill or an impact driver but they have what Milwaukee calls a “Shockzone” on there which is supposed to help dampen vibration and impact from using an impact driver.  The kit comes with 142 bits including Robertson, Philips, Flat-heads, Drill bits, and extended versions of much of these as well. 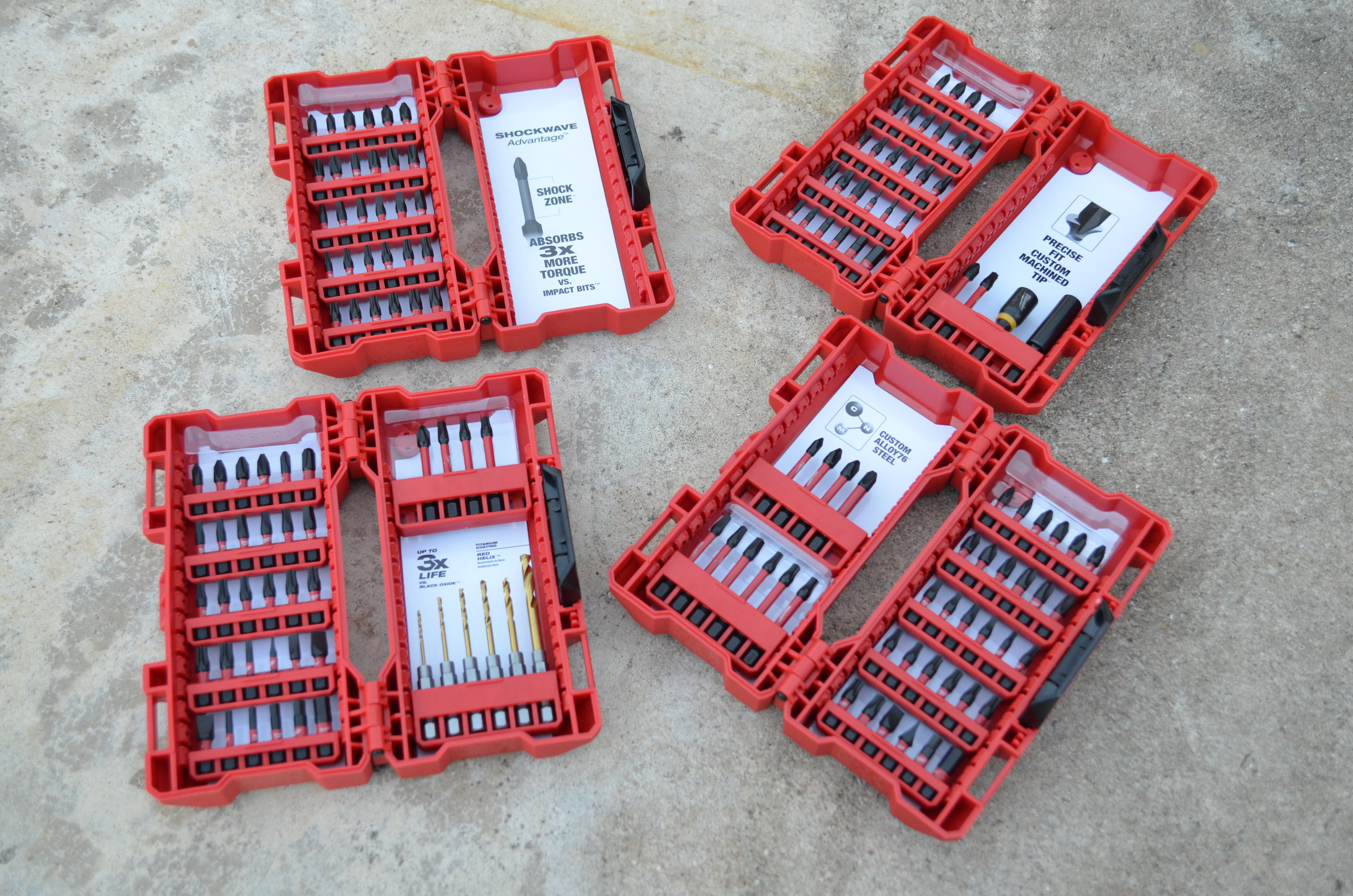 I personally do not like these as much as some of the other bits that I have used.  Something about the added length of the extended bits and really the fact that they’re not magnetic pisses me off more than anything.  I work above my head all the time and I really rely on my bits to be magnetic, or at least the extensions to be so no matter what bits I put in them, they hold on to my screws. Using these extended Phillips bits for instance will not hold your screws on without using another type of extension that is together with the bits. If I’m on a 12 foot ladder reaching above my head and I start drilling and the screw slips off and falls on the ground I’m screwed.  That already happens with magnetic bits but it happens way more often with ones that are not magnetic. You’ll just go to put the screw in and reach over your head and it falls right off, it doesn’t stick to the bit.  Electricians really only use magnetic tips and if they’re not then they should be. You’re always one-handed, and you don’t have the fortune like a carpenter does of having two hands – one where you can hold the screw on the bit, bring it to the material to start drilling, and keep your hand there so that nothing falls off.  Most of the time you’re holding the material up with your left hand and drilling with your right (or vice versa if you’re one of those unfortunate left handed people). Or if you’re holding a strap and screwing it something, holding up a panel and drilling holes into a wall, you rely on the magnet to hold the screw on the tip of the drill.  So I think with the great marketing they’re doing on these and as nicely laid-out and pretty as they look, Milwaukee missed the fact that we need magnets. 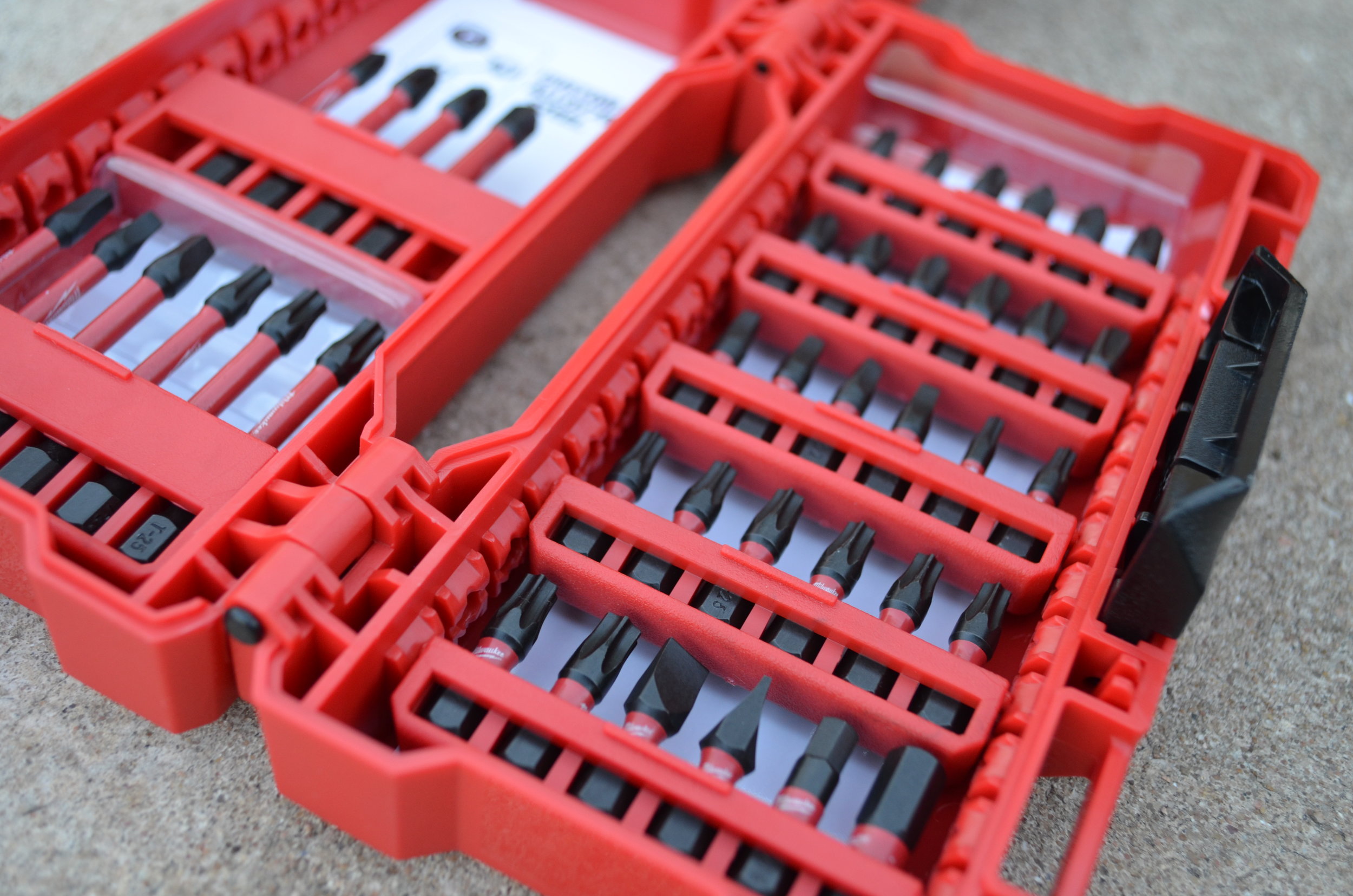 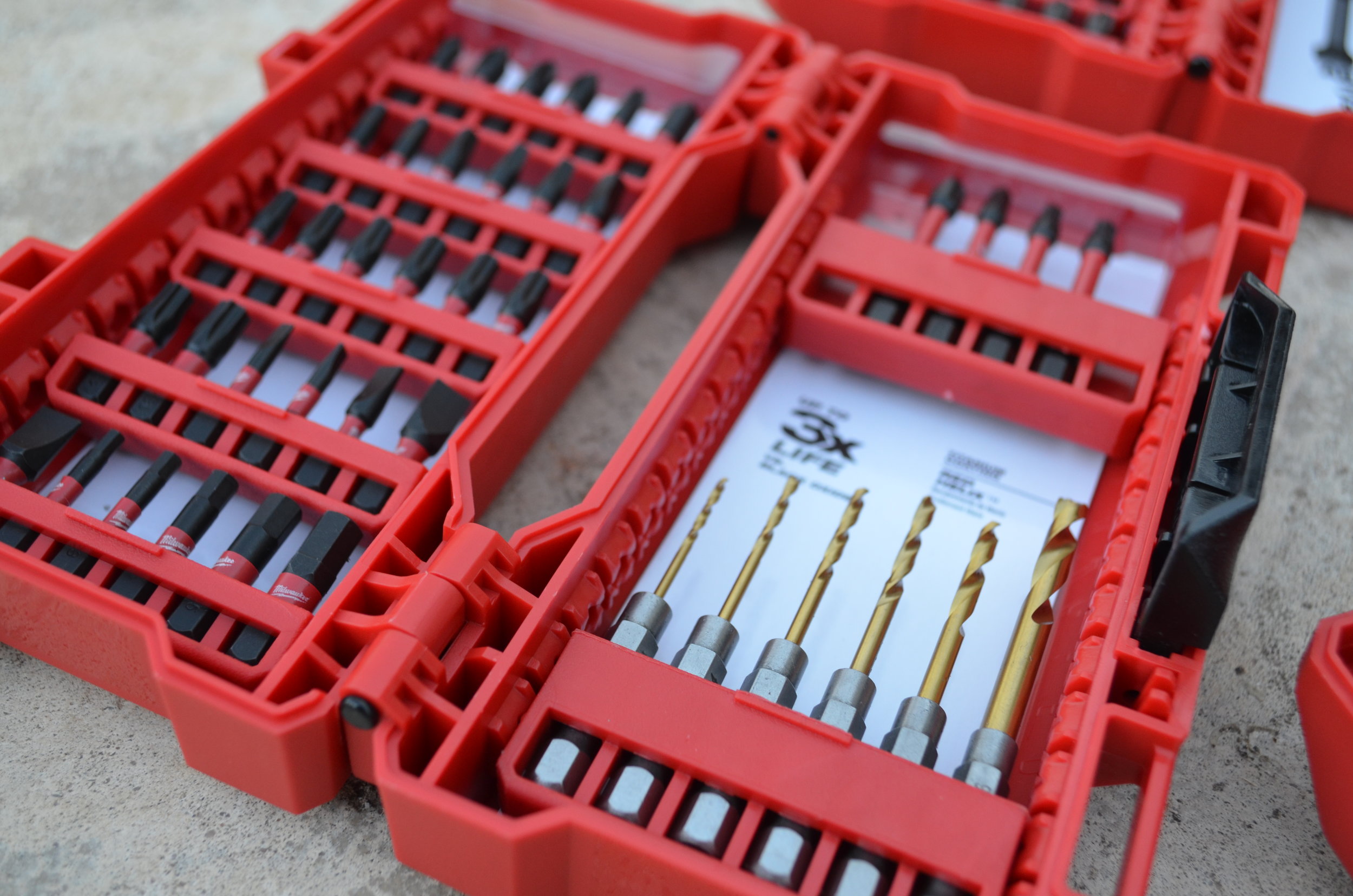 With the patented custom Alloy76 steel, they’re really sturdy and durable – I have never seen someone break any of these.  They don’t strip out very easily which is awesome because some of the weaker brands of tips can be ruined quickly when you strip the screw and the entire bit out.  I haven’t gotten to use them extensively over a long period of time but they’re marketed to last up to 30 times longer than other bits. I’ve only ever had to grab these because I’ve lost the others or one of my apprentices kept one of the bits, but I haven’t had to replace these bits once I start working with them. 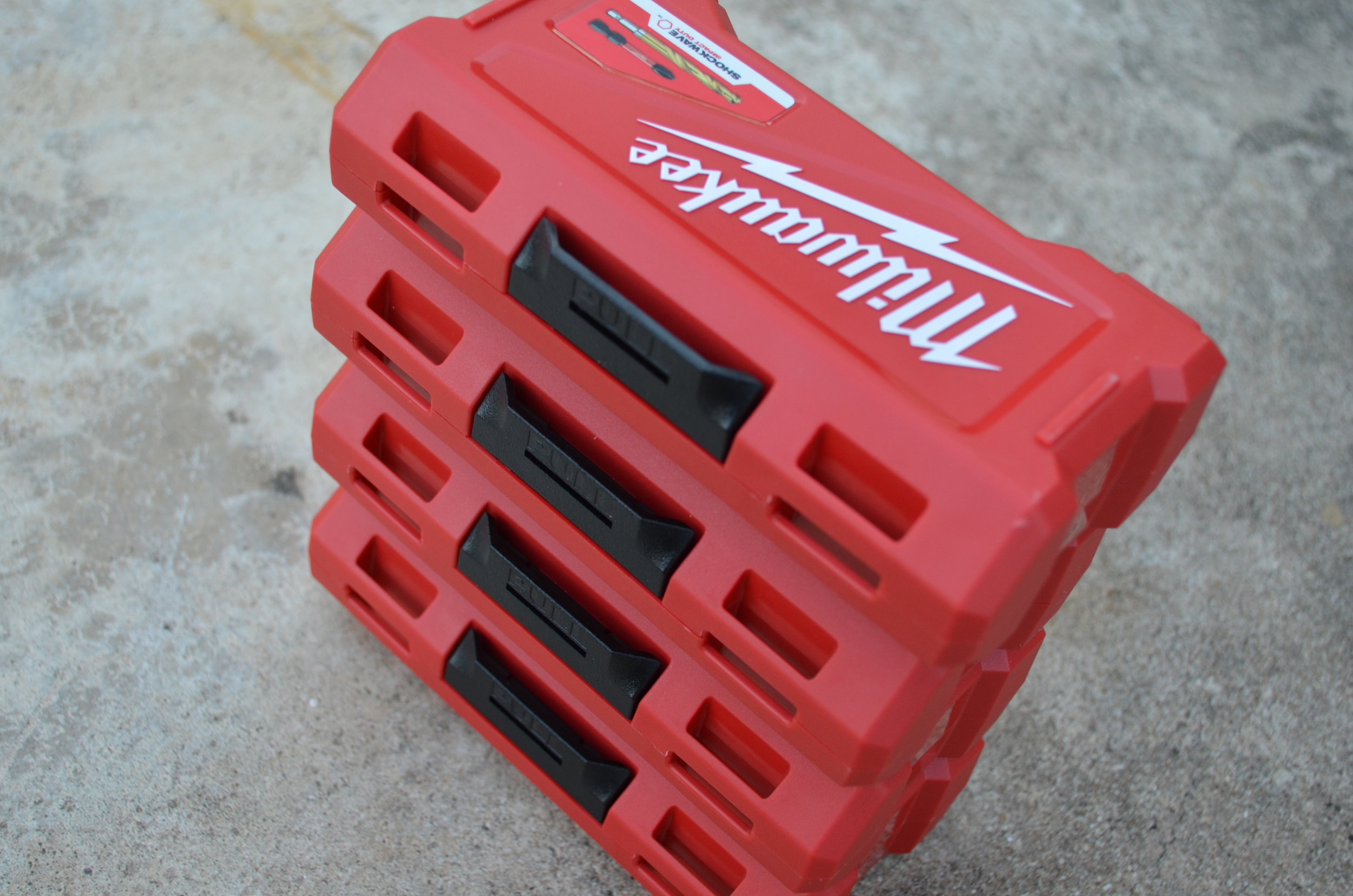 Overall will I use them?  If I lose all of my Dewalt shit, maybe.  But I kind of just want to give the whole kit away – not because of lack of quality, just preference for Dewalt’s stuff.  I need far more than what’s included in this set. They only give you 6 different drill bits for actually drilling out holes.  I have Milwaukee’s whole drill index and don’t need these little couple drill indexes. Maybe if you’re a handyman or if you’re an apprentice or something where you don’t have to rely on needing a full 1/16 to ½” drill index daily then this would be fine.  If you just need a couple bits here and there this whole kit has generally everything that you’re going to need. For anyone that’s out there just using an impact driver for screwing into decks or hanging drywall, this is really a good handyman/apprentice set.

There are some people who swear by these bits – they’re affordable, they come all together in a package, and they work with a drill and impact driver. I see why some people like them but I personally don’t – I need more than just Philips, flat, and square. I need torques (the star bit), and I like to use a sleeve.  Dewalt makes a drill extension that has a sleeve on it so when I put a screw on the end of it I can slide the outside of this extension over the screw and hold the screw from falling out. So if I’m drilling and it somehow slips off as I’m drilling into the material, the screw doesn’t fall. The sleeve catches it and slides back naturally with what I’m drilling against.  I think the sleeve is such a huge help – when you’re drilling into something that’s and you’ve got a wobbly crazy screw in an uncomfortable place that you can barely reach, just having that sleeve that slides over is such a savior in a lot of instances. So I prefer that instead of the longer bits in the Shockwave kit. The short bits all seem like they work fine, but again I don’t know that I need to have anything that’s specifically designed for use with an impact wrench. 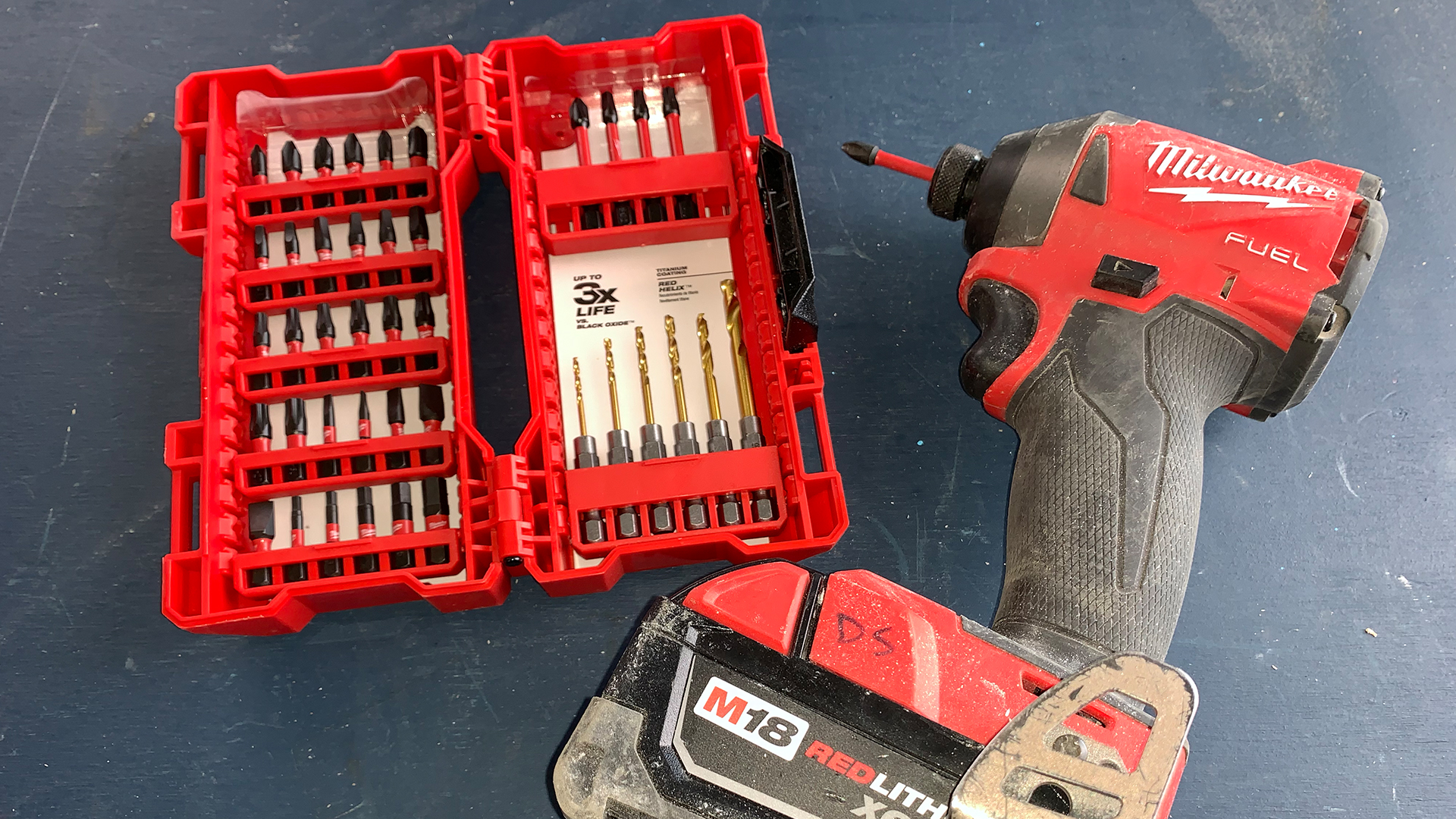 I’ll give this drill set a 4/5 stars.  I think it’s still well designed and extremely reasonably priced, it just seems like a really basic set up.  There’s not enough drill bits, there’s way too many Phillips and Phillips replacements.  It’s like they give you six of every size, but I’ve been using the same one Phillips tip for roughly the last year.  I don’t strip them out, break, or loose that many of them so I don’t need six or seven of every single one of these tips.  It’s a nice idea but even a few will last your entire career. There’s also not a big enough selection of drill bits (I still need to go buy a drill index after this).  They give you a 5/16” hex bit, but why not include a ¼” and a ½”, ?”, 7/16”, ½”, etc? That would be so badass because electricians use those all the time. In my opinion,  this set is a little over marketed. I probably won’t use half the bits in here, and the ones I will use won’t be put to work very often compared to the rest of the stuff in my pouches. 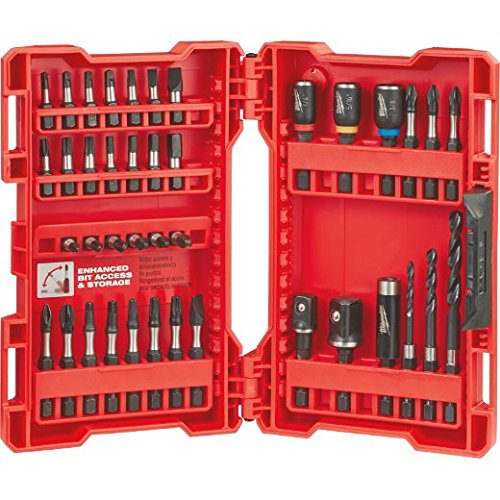 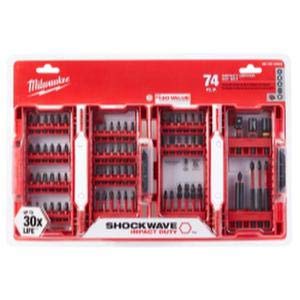 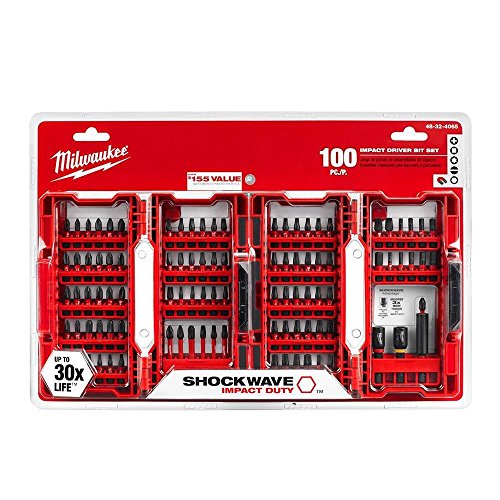