Today we’re going to test out the Ryobi 18V 3/8” Cordless Bolt Cutter. This thing seriously looks like a Transformer’s ripped off appendage!

Of course the first thing that I wanted to do when I saw a warning label not to stick your fingers between the blades, was to stick my finger between the blades. But I didn’t because I’m a grown-up now. I have not gotten to use a lot of Ryobi’s tools, as they generally do not perform well in professional environments. So I’m glad I got to test something out that I could possibly use in the field. Electricians use bolt cutters a lot, but generally they’re for smaller machine screws and we need the threads to be usable once we cut them. But sometimes you forget the combination to the lock on all your ladders or materials and you need to get into them so having a bolt cutter that you don’t have to squeeze could be an awesome thing. 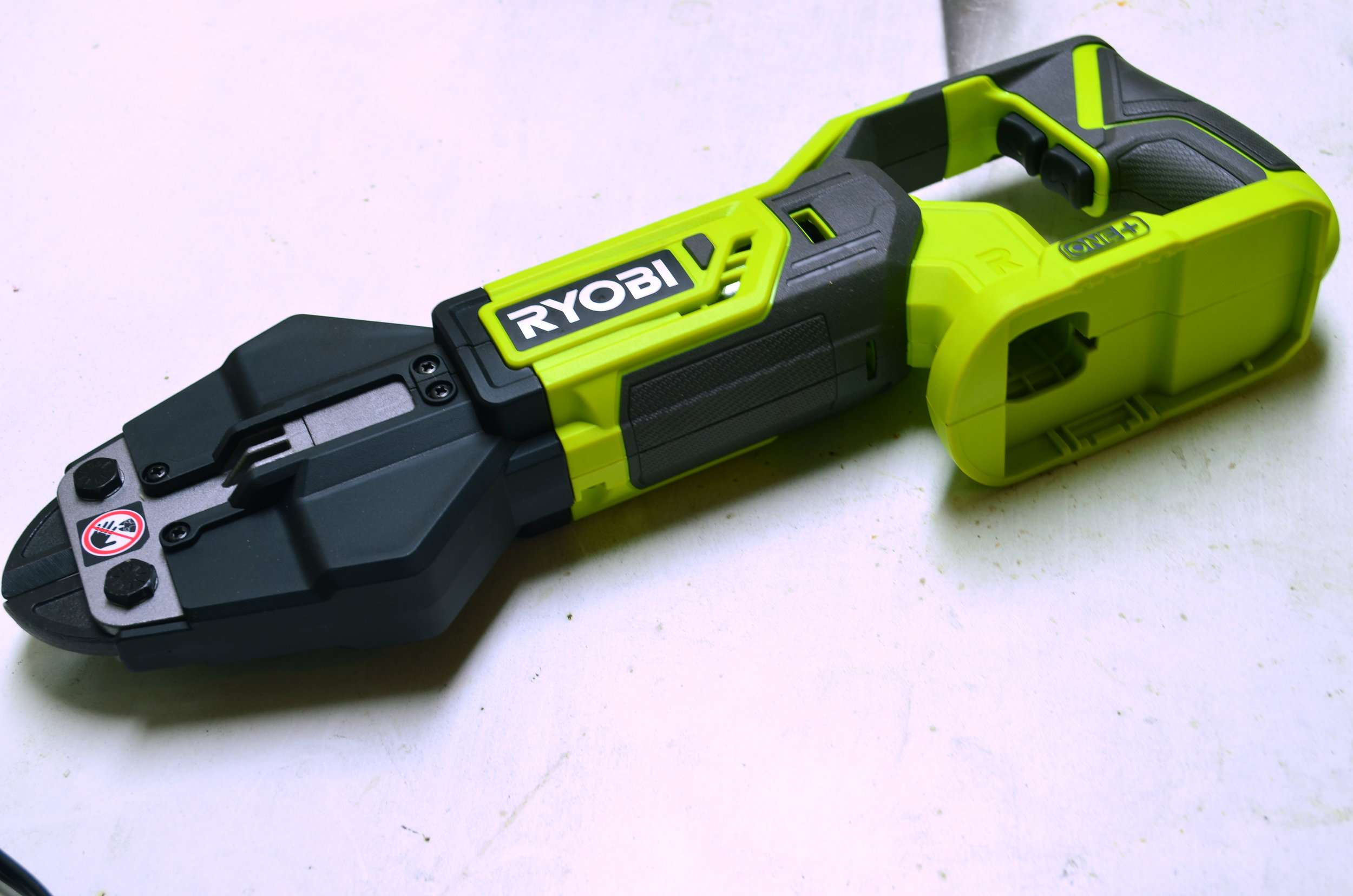 Upon opening the package the tool itself feels extremely durable. It does not feel like it’s under-built. In fact it feels well engineered and ergonomically efficient. I went out and bought a few different bolts to try to cut (you can see how the tool performs in the video above). The first bold I tried cutting was a 1/4“ x 20 threads per inch bolt. It had absolutely no problem cutting through this bolt however the teeth have a 1/16” gap between them. When the job is close to done, so the jaws did not completely cut through the bolt. When I pulled the bolt out the threads were mangled and I had to bend and break the bolts tip off that I had just cut. This is a little disappointing as it seems like a very messy way to cut the bolt so I tried again several times with the same results.

Next I raise the bar a little bit to a 5/16” x 20 threads per inch bolt. Upon squeezing the trigger the tool executed just fine, the motor did bog down a bit as expected, and again the jaws did not clamp down all the way to cut through the material which left the bolt mangled and still in one piece. Again I had to break the bold in half and upon inspecting the threads found there’s absolutely no way I would be able to re-thread this bolt into anything to use it. It appears that this bolt cutter is not meant for resizing bolts for reuse, but rather cutting excess off from bolts that are too long. 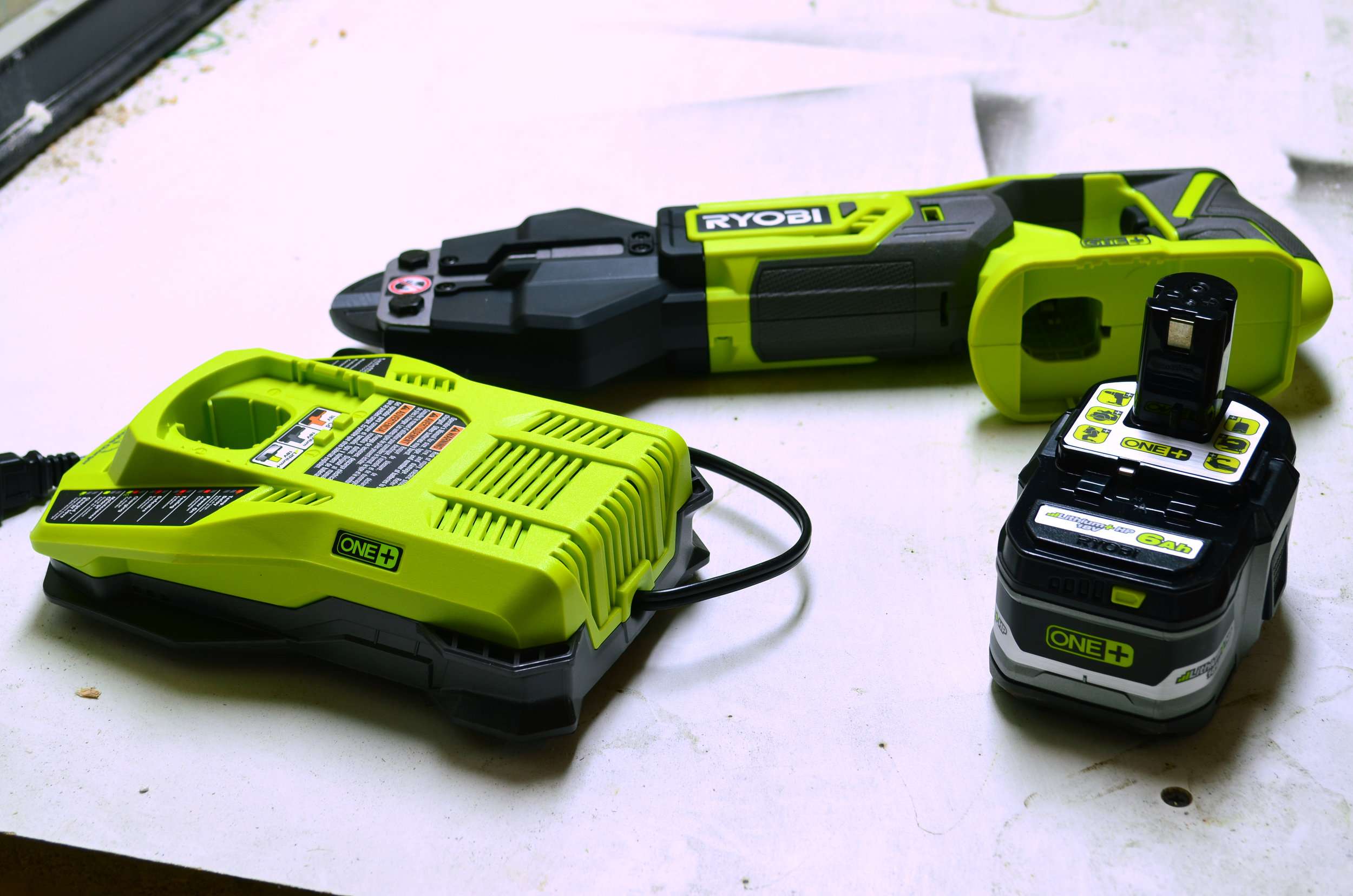 As a craftsman however this is a terrible idea for a tool. Any true artisan out there will know that when you cut a bolt you’re always going to want to save the threads. Anytime I cut a bolt off I always thread a nut onto it first, then cut the threads, then back the bolt off so I can reshape the threads for use later if I need to disassemble whatever I am building. This is not a tool for a professional craftsman.

The final test was to cut a 3/8” x 20 threads per inch bolt. This tool specifically says that it is rated for 3/8” bolts, so surely this should not be a problem.  I pulled the trigger and the motor bogged down quite a bit, but cut through the whole bolt and shot the end off as expected. I was happy to find out that at least it could handle cutting through that thick of a bolt. I tested with this same bolt two more times and in both instances the tool stopped cutting multiple times before making it all the way through the bolt. The tool was acting like the material was too strong to be cut through. This can’t be the case though because these are not stainless steel bolts. These are your normal cheap zinc-coated general purpose Home Depot bolts. In my opinion a tool rated specifically for cutting through 3/8” bolts should cut through 3/8” bolts with zero problems every time. This is not the case with this tool. 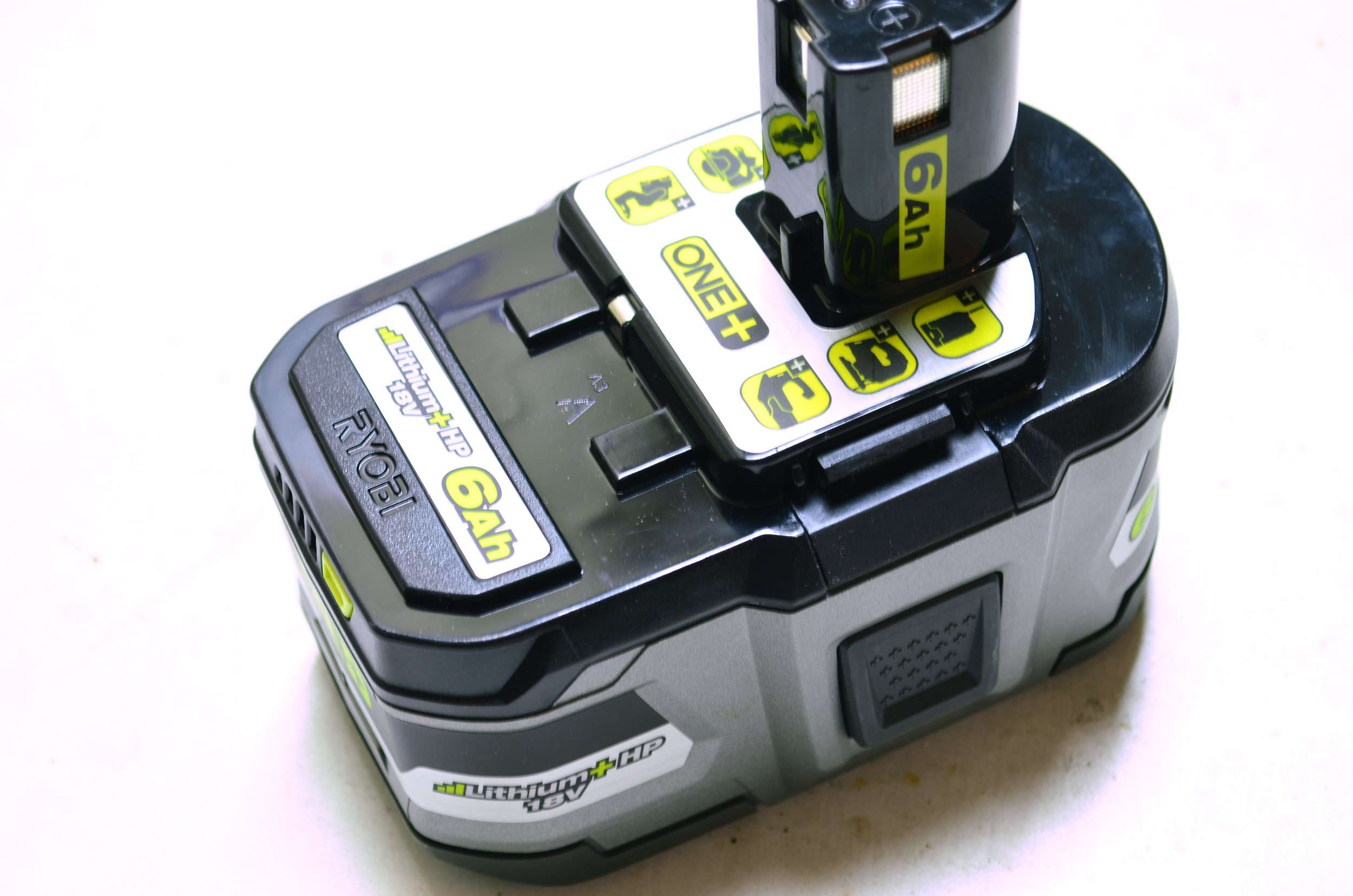 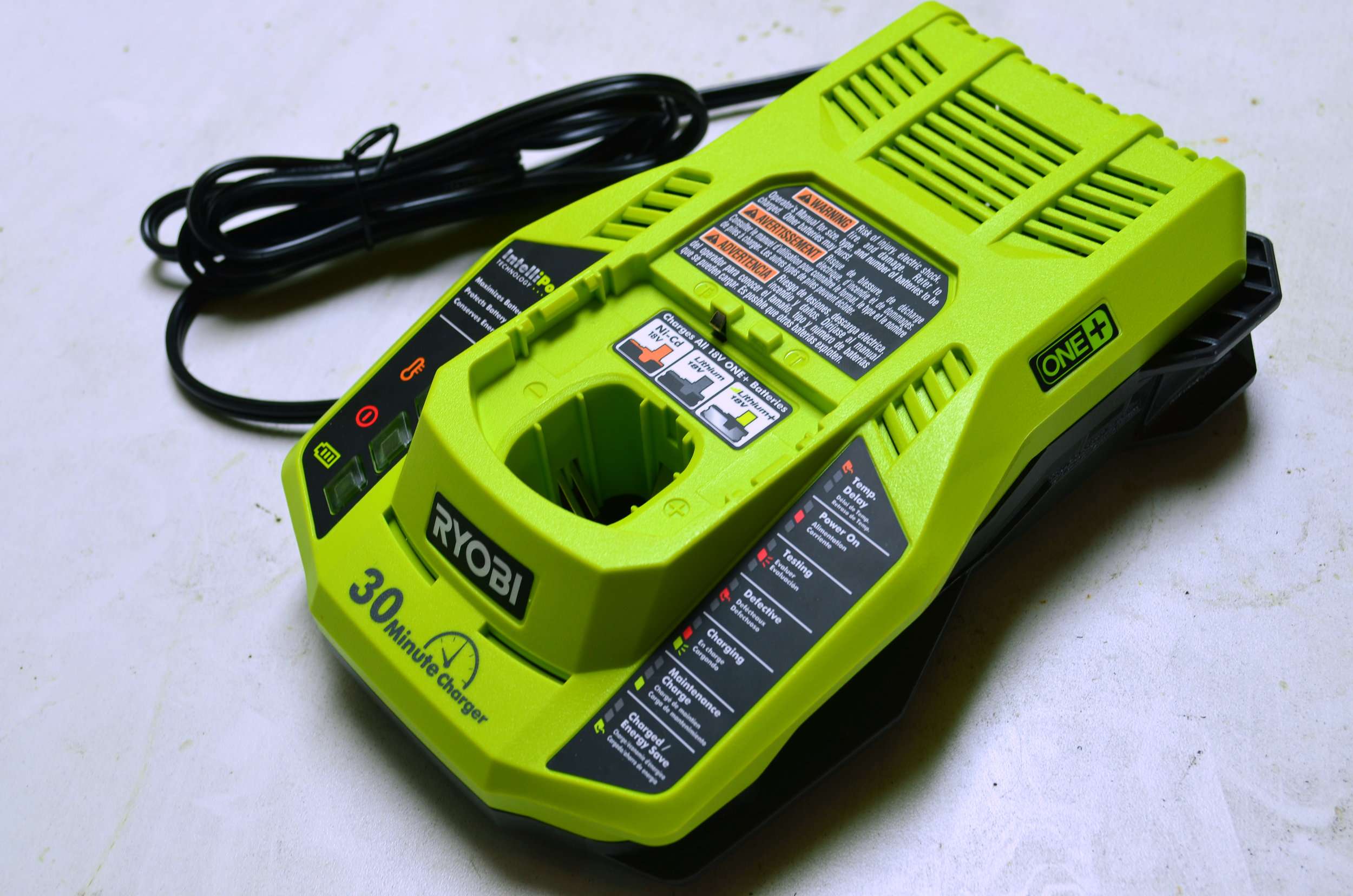 One last thought that I feel is very important for Ryobi to address is the mangling of the threads after cutting. I think it would make far more sense if the jaws of this tool had threaded holes for multiple sizes and applications. This would allow people who are just trying to cut something down from a larger size to do so with the regular jaws, but then those who want the threads to be saved after cutting could thread a bolt into these spots and the blade action would still cut the bolt. Then, like most electrical tools, you can unthread the bolt from the tool and your threads are saved.

Unfortunately I am not very impressed with this tool. I give it 2.5/5 stars because I seriously will never use this out in the field professionally. I do realize that Ryobi does not design professional grade tools, they are more focused on the affordable DIY market for individuals that need select tools in their homes and garages. However I don’t know anybody that would use this tool to cut bolts unless they planned on throwing the bolts away. And if that’s the case why not just use a sawzall or a manual bolt-cutter? Just my opinion. I do see value in the tool, however, if people just want to be able to cut through things. The only downside is I did attempt to cut through a master lock that was rated on an 8 on a 10 scale and I screwed up the jaws permanently so now there is a divot in the teeth and it won’t cut anything. I’m sure this tool is not designed to be able to cut through boron carbon steel but I just thought it would be really cool if you could cut through locks with it since cutting threaded bolts seems useless. 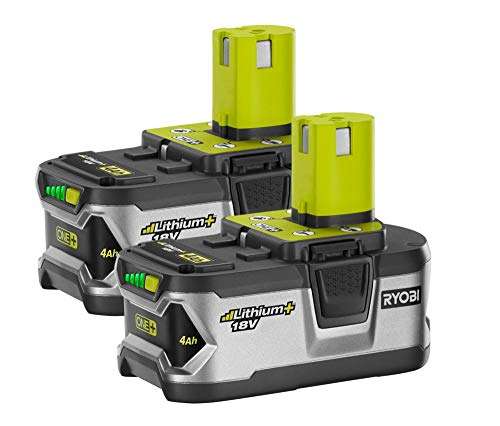 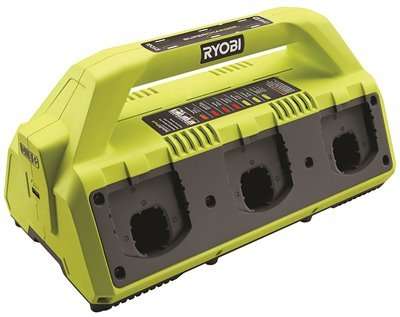 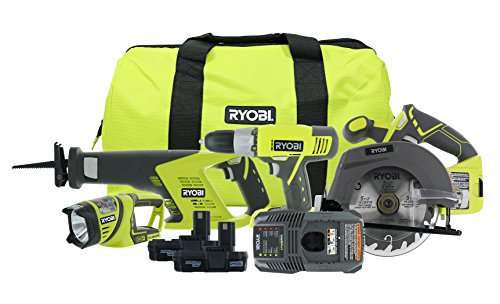