I’ve been a big-time Klein user for quite some time now, so it’s great to get the opportunity to try some tools from “across the pond.” This is a little bit of an unfair comparison because the Knipex set is specifically designed to be electrically insulated, and are rated to 1000v. The Klein standard set of the same tools say on the handles “Not electrically insulated, do not use on live circuits.” So with that in mind, we can’t compare them based on that factor. 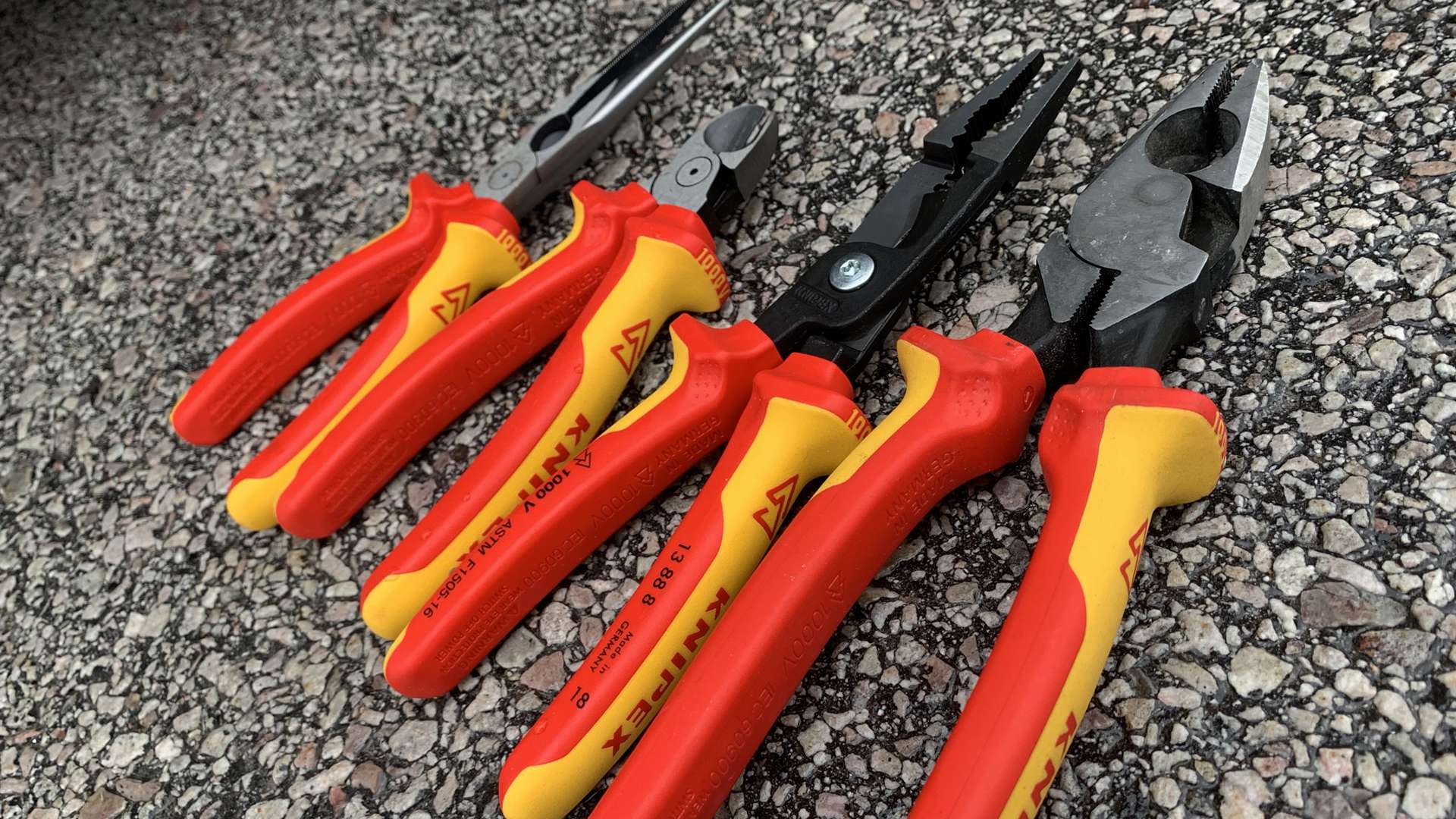 First off, it took quite a bit of research to find this out, but evidently the correct way to say Knipex is K’nee-pecks. Sounds kind of silly when you say it that way, but that’s how the boys in Doichland say it. (Ok it’s spelled Deutschland = Germany….notice a pattern here?)

Out of the box these tools feel extremely well machined. They feel rugged, just as rugged as the Kleins really. The insulated handles are rated for 1,000v whereas most standard electrical tools you’d THINK are electrically rated, specifically say somewhere on them “not electrically insulated, do not use on live circuits.” 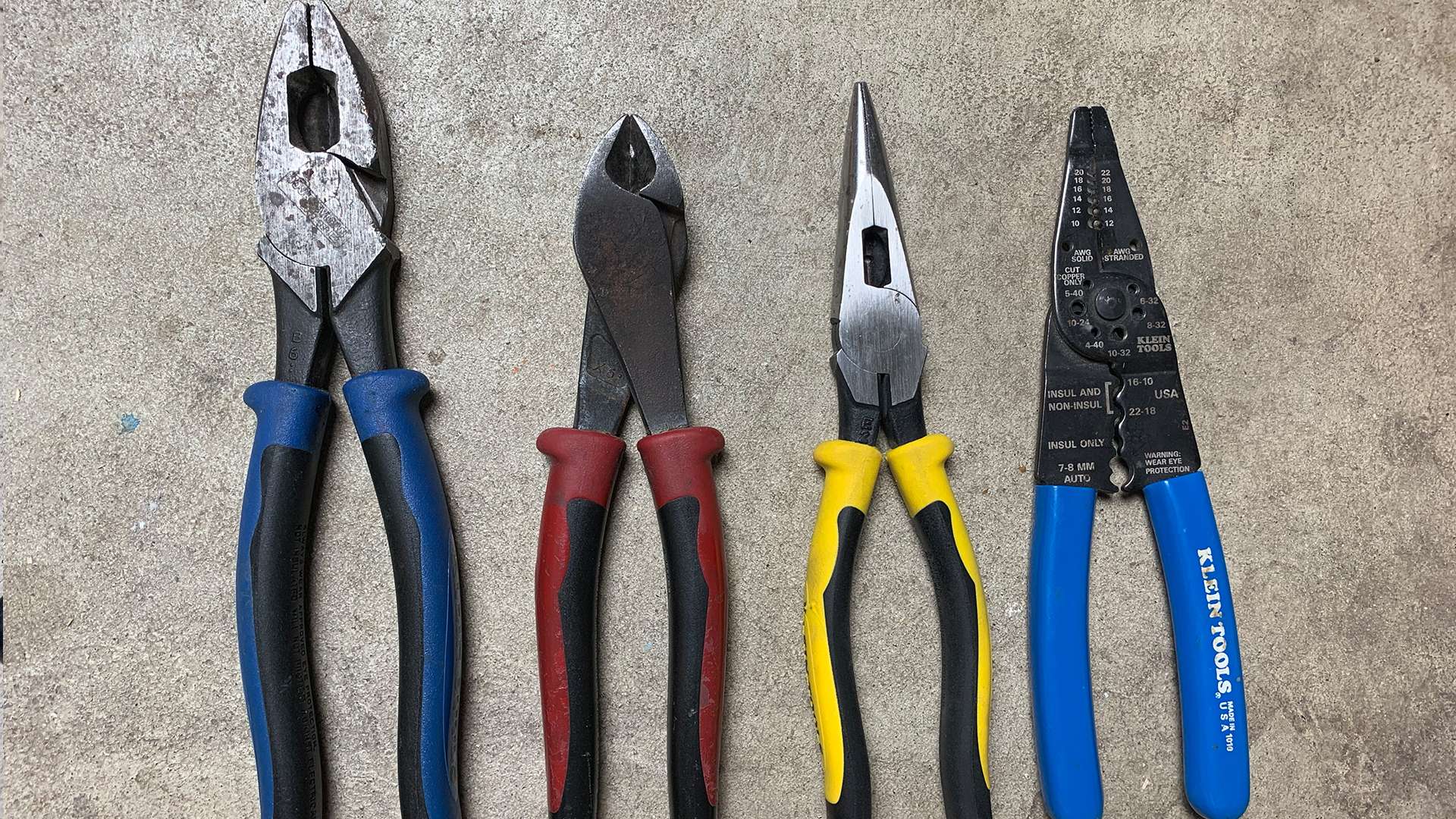 Again I’d like to point out that this is not a fair comparison. The set of Kleins that I’m comparing are not electrically insulated but are probably the most used set of Klein pliers on the market. They’re the preferred buy by MOST electricians in the US and rightly so, due to the quality. I’m a firmly-planted Klein tool user, and will continue to be that way because they’ve never failed me. 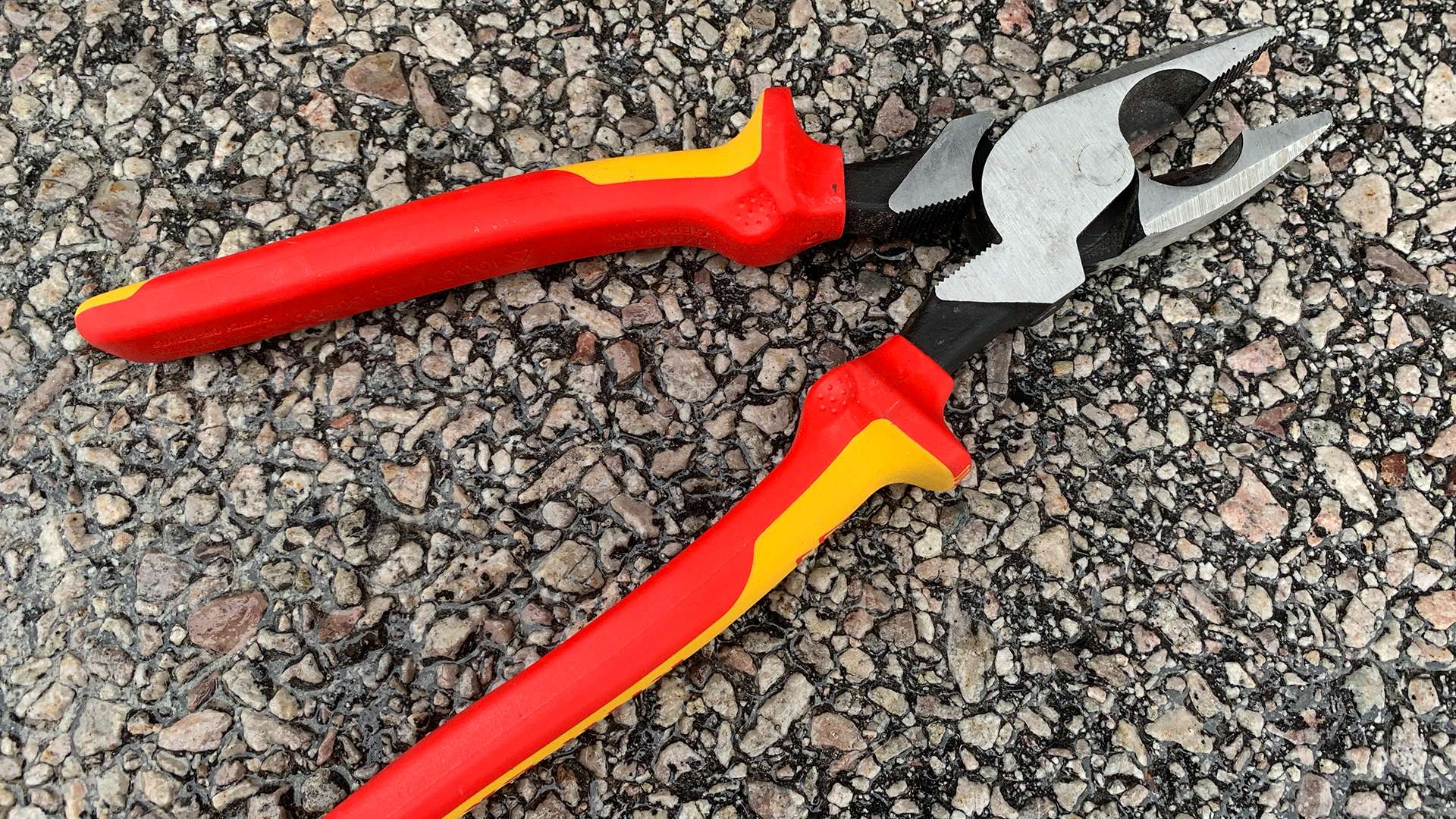 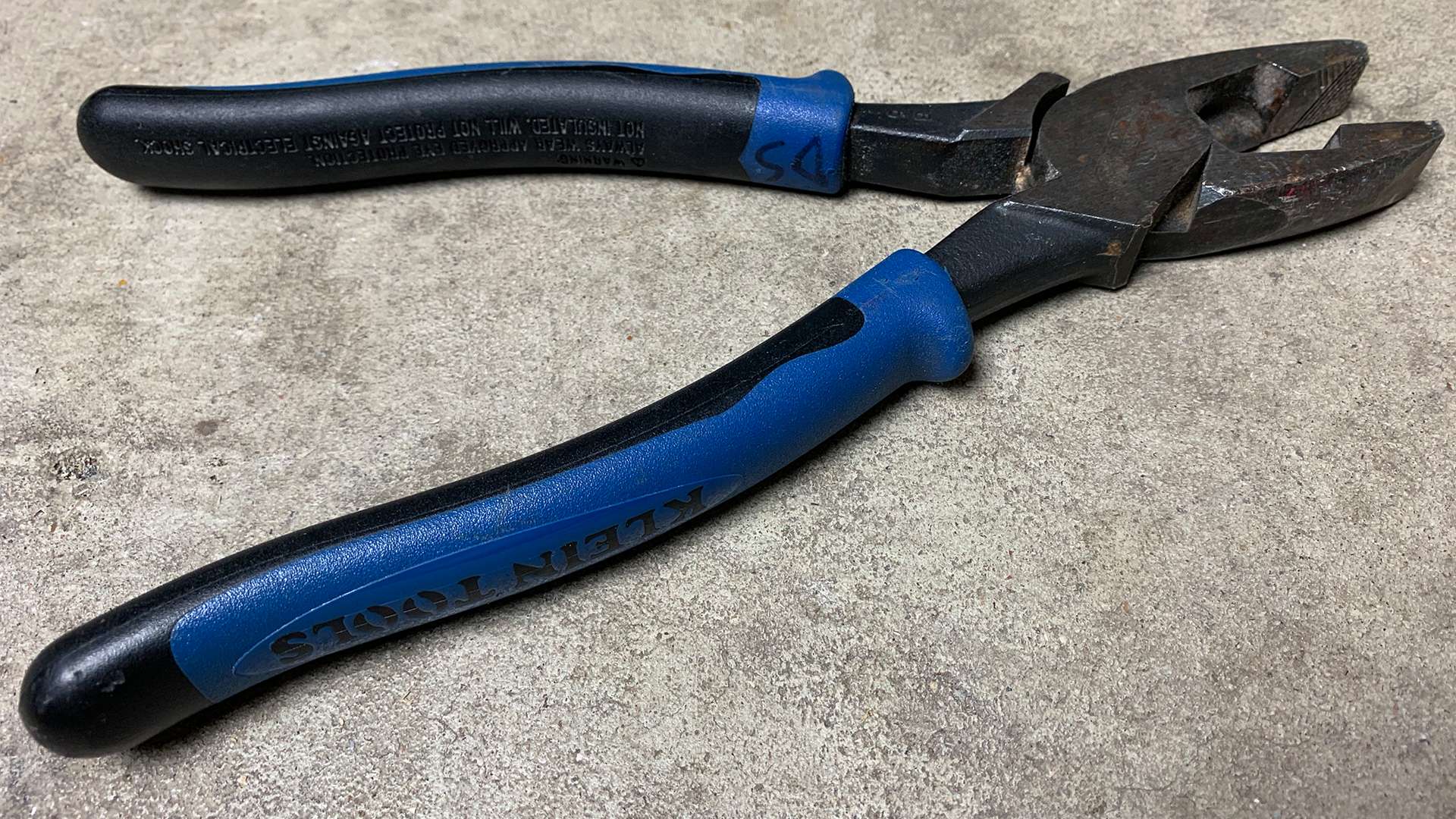 The differences in the two lineman’s pliers are few, but they do make a difference. The Klein has great ergonomics on their handles. This is the only style of Klein lineman’s pliers I like, because the feel of them is outstanding. I like how heavy they are; I can beat the hell out of them and they take every bit of it without fail. You do have to be careful not to damage the round pin that the jaws pivot on, or you’ll never be able to open and close them the same again. The Knipex however has a much more satisfying cutting feel. The tool feels as if it is machined with precision, where the Klein feels like it is machined like a 67’ Chevy. Bold and beefy. I do like the pulling teeth in between the handles under the pivot pin, as it helps with grabbing and pulling wire or a fishtape. My set of Klein’s don’t have that. 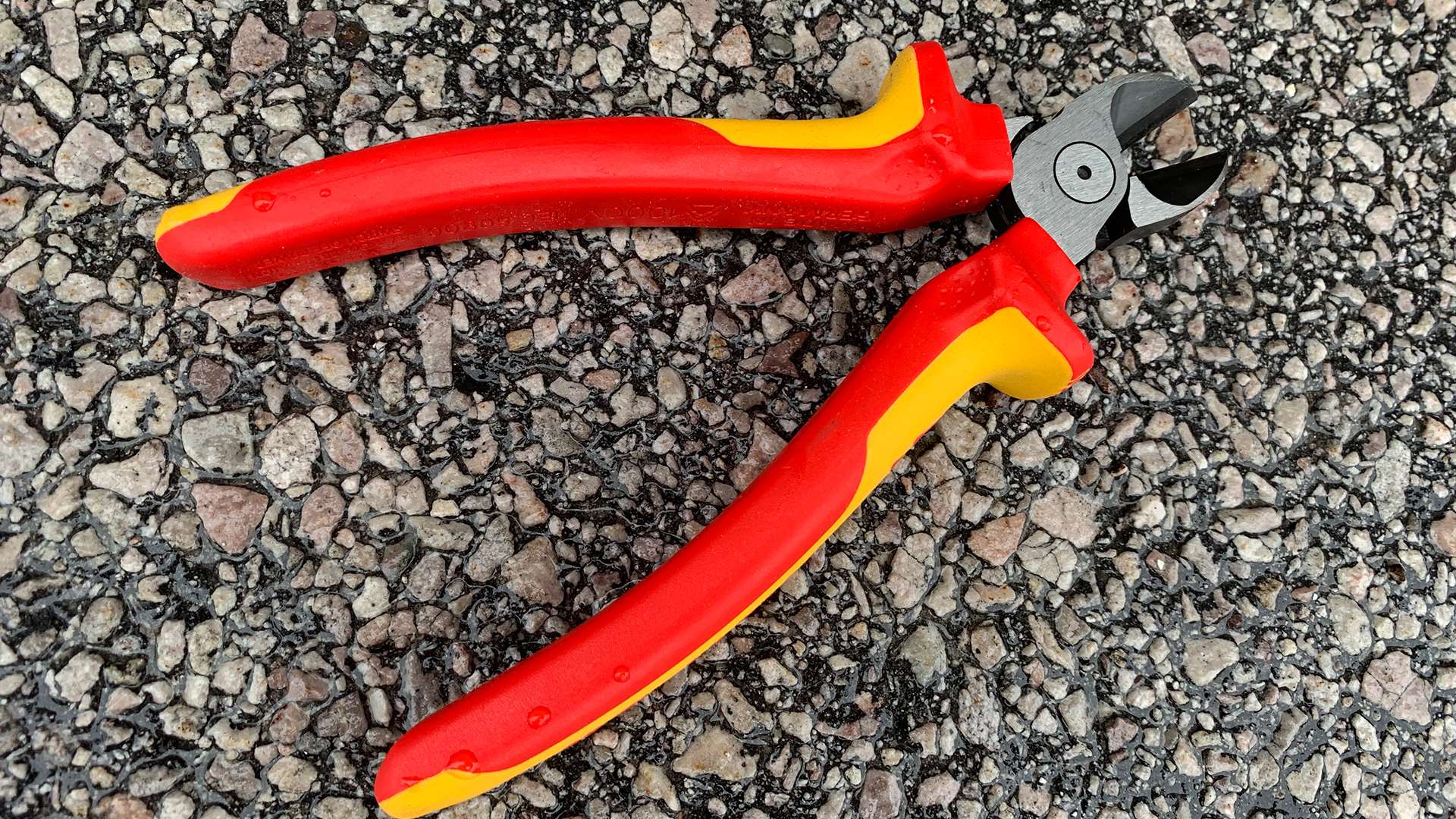 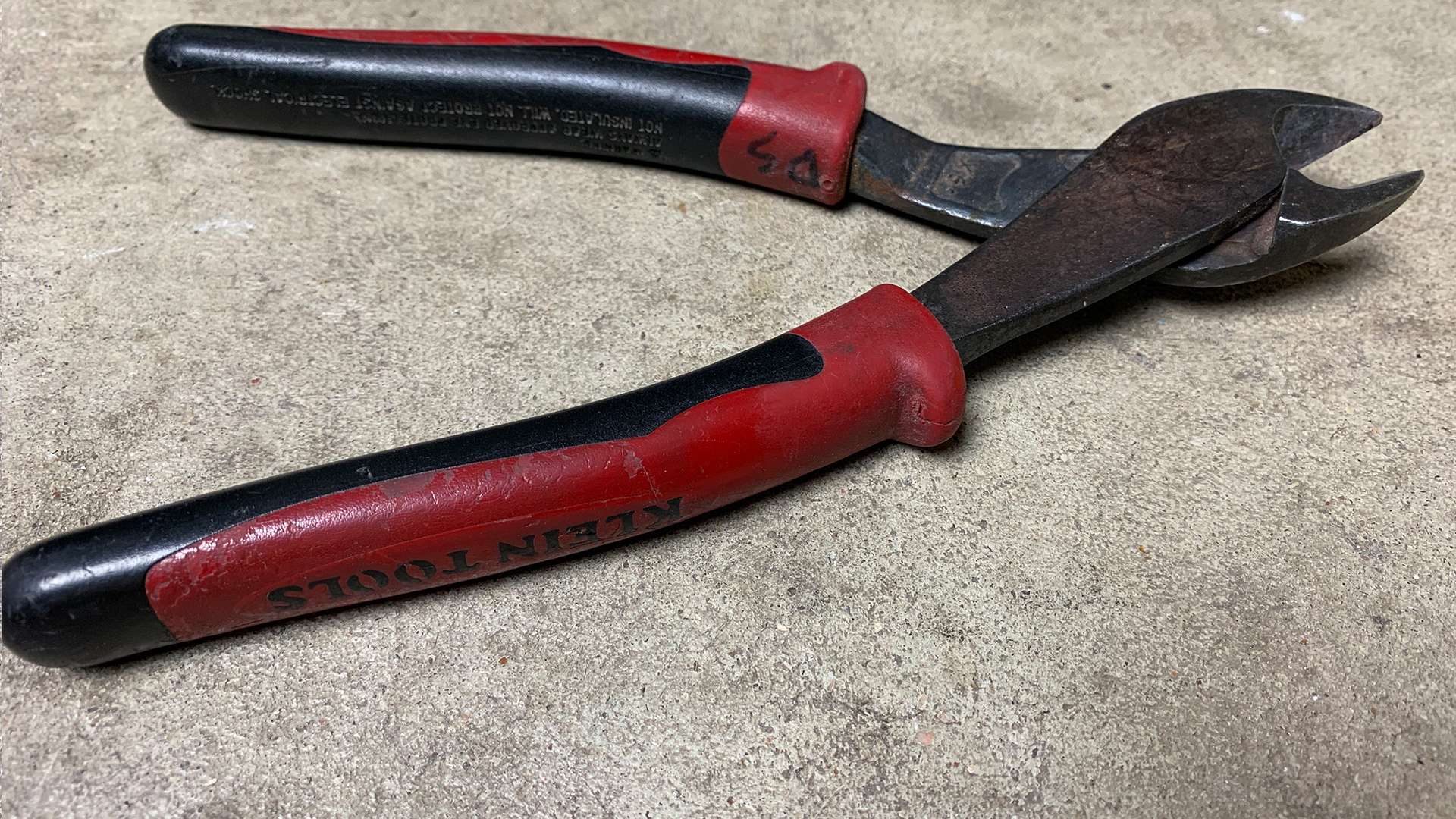 The Knipex really lose it for me here. I don’t like how stubby the tool is, as it feels like the tool is all handle. The cutting edge is too close to the handles for my taste, so it doesn’t allow you the same kind of leverage to pull staples out or pry with them, as the Kleins do. The cutting edge of the Knipex is much sharper however. 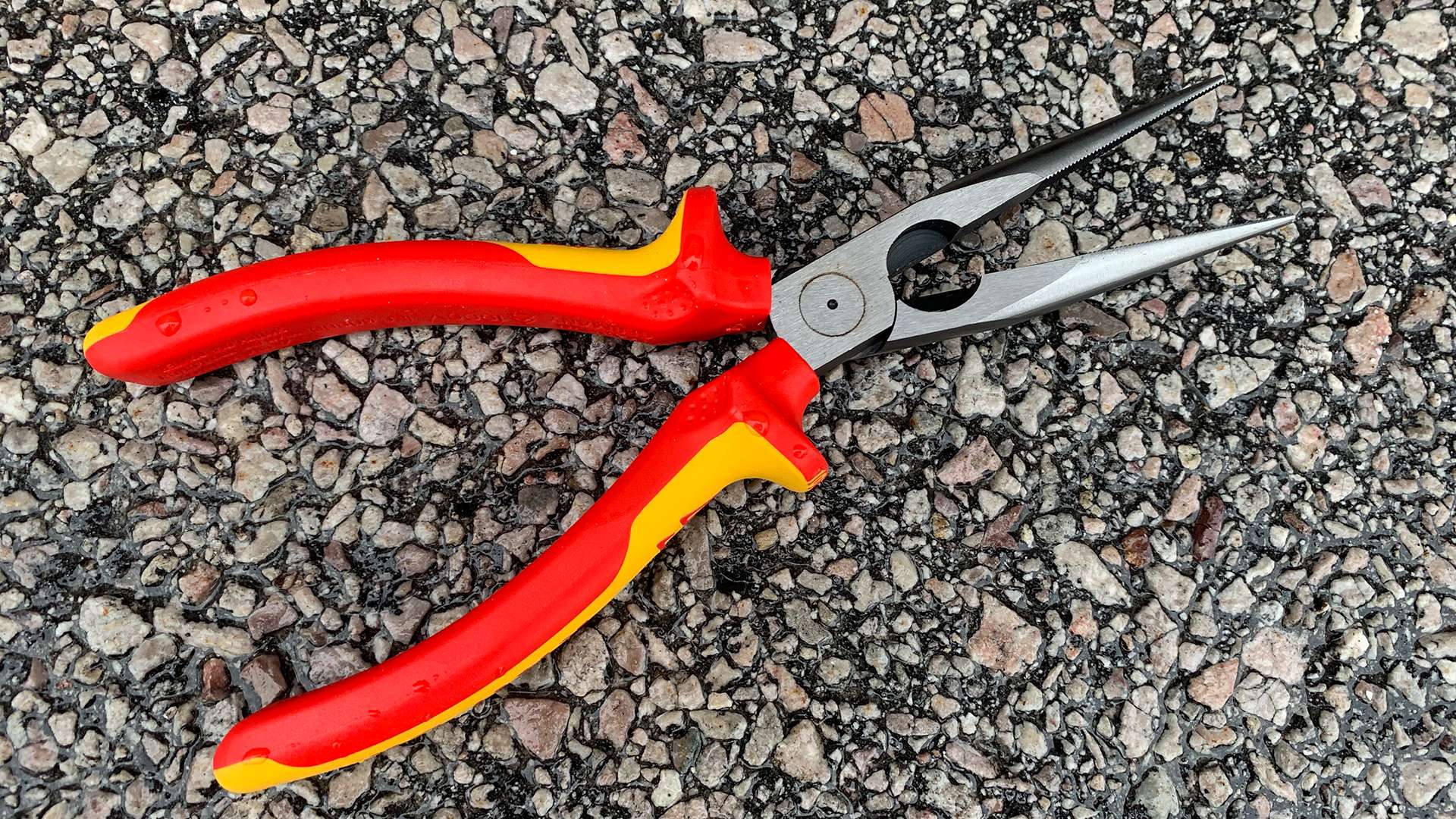 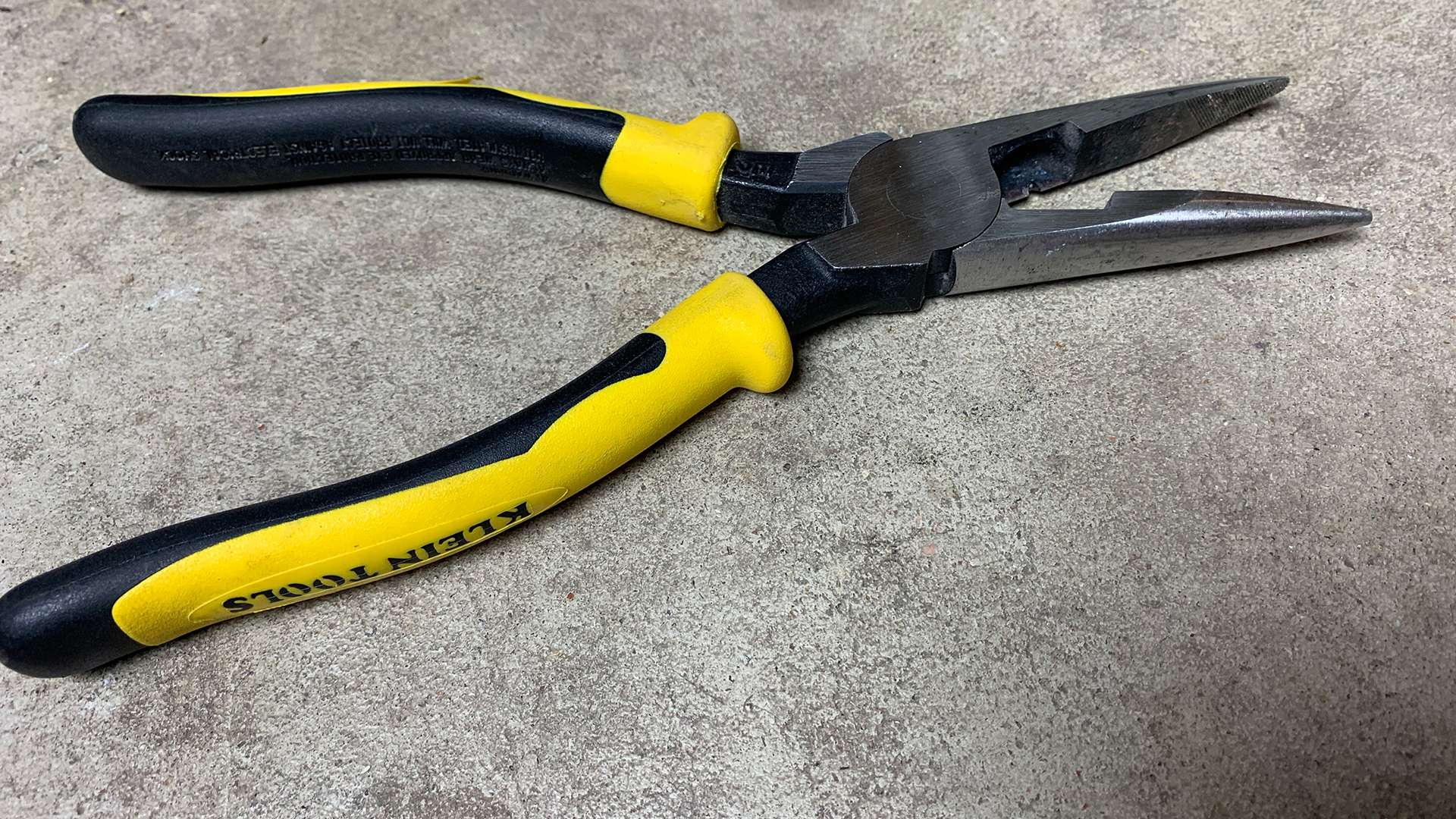 Germans call this a “long-nose” pliers, we in the states call it a needle-nose. It’s a toss-up for me really – I love both of these and for different reasons. The Klein is rugged and durable. I like that it has a small notch in the cutting edge that can be used for a 10AWG and 12AWG stripper. This is also a fault, however, because it doesn’t like to cut through large things very well. That notch actually impedes you from cutting very well with it. The Knipex has a sharp cutting edge, but more impressive is the much-longer nose, machining of the teeth, and the width in which the jaws open. The Klein brand is limited in all of these aspects. The handles on the Kleins are longer than the Knipex, which I do like. However the Knipex feels like a more precision-quality tool. 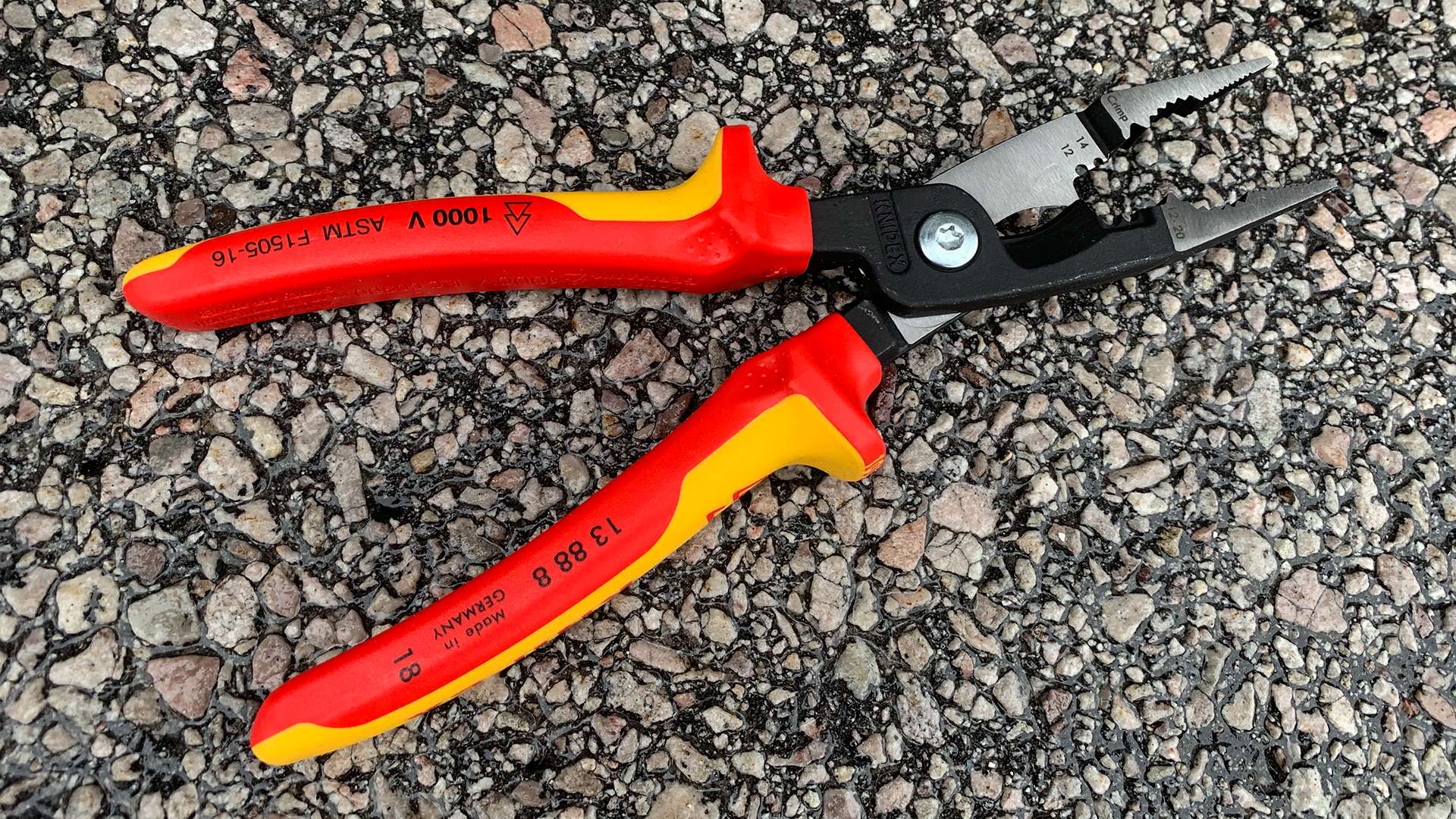 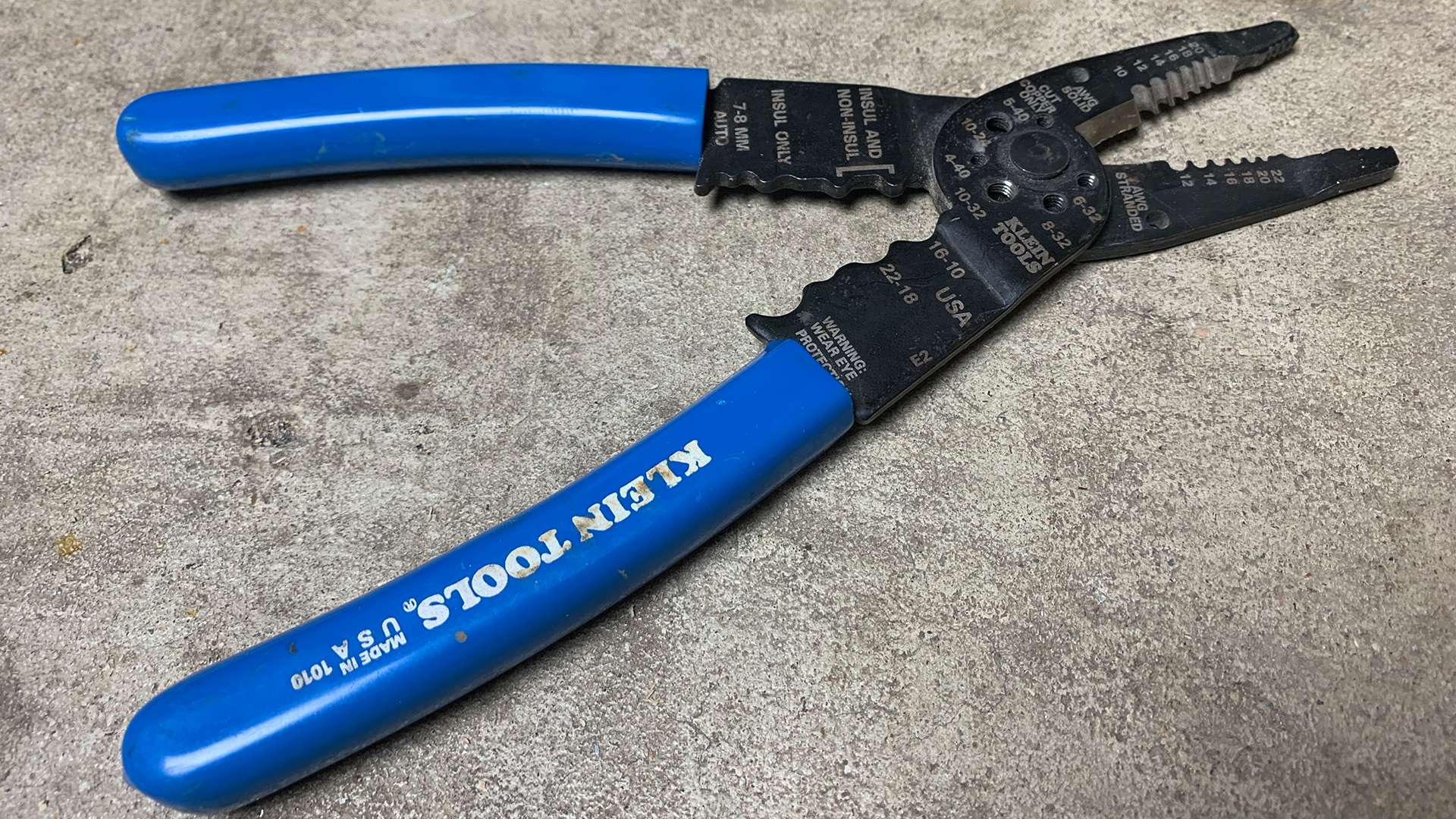 This is kind of a difficult comparison to make. First off, both of these tools are sort of in a class of their own. However they both serve a similar function. Both are meant to be a multi-use, electrical installation tool. The Knipex has an amazing rounded shearing blade set-up to cut all the way through a cable, whereas the Klein has a similar setup, but nowhere near as dramatic. Both have a set of crimping options, however the Klein has more of them, but the Knipex do a better job with the wider surface area crimper. They both have the shape of a needle-nose pleirs mixed with a lineman’s pliers, but the larger surface area of the Knipex proves to be far more useful. They both have wire-stripping grooves which seem like a no-brainer, however the Klein has much more options which proves to be much more useful. The Klein also has 6 different bolt-threading and cutting holes. I find this a MUST HAVE in a multi-tool like this, and unfortunately the Knipex doesn’t have them at all. Understandibly the Knipex is for working in live panels, specifically, so there’s really no need to have bolt cutters on them. But they really could use more stripping sizes than 12AWG and 14AWG.

For insulated pliers, Knipex definitely takes the prize on this. These are the best electrically-insluated electrician pliers I’ve put my hands on. For everyday use though, the Kleins win. I’m trying to get my hands on a similar set of Klein insulated pliers, as well as a pair of Knipex non-insulated so I can do a more-fair comparison that match spec for spec. Eh em….KLEIN….WHERE YOU AT???!

For more detailed information on these Knipex pliers CLICK HERE.

For more detailed information on these Klein pliers CLICK HERE. 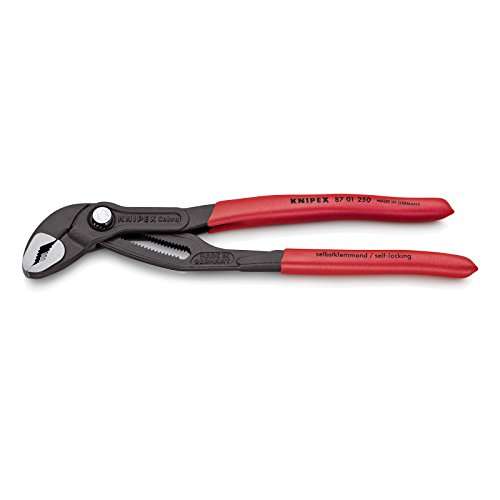 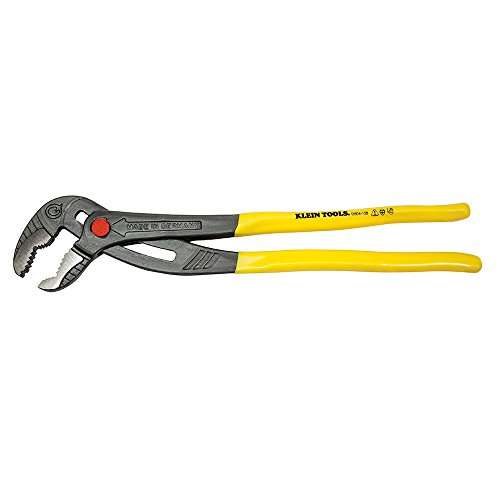